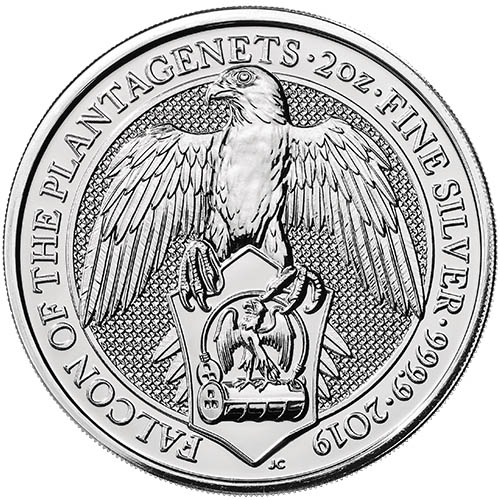 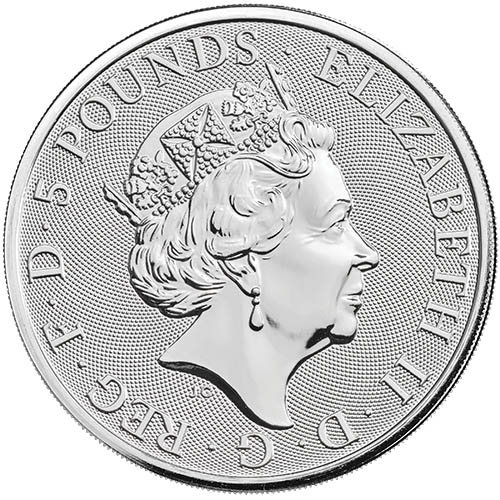 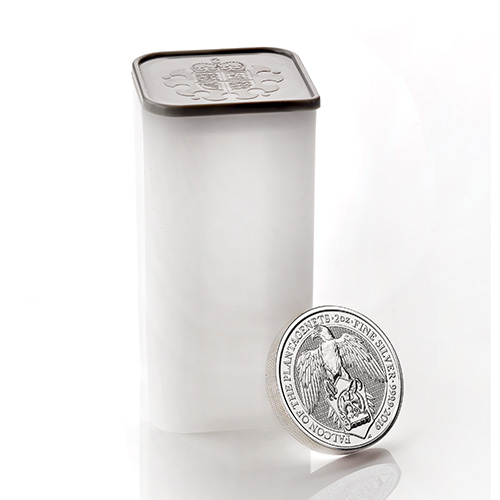 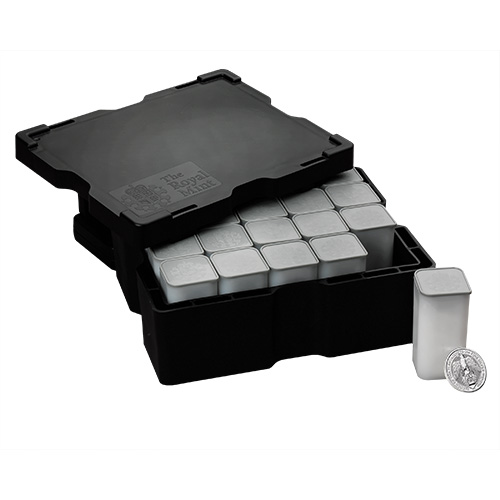 The Royal Mint of England introduced the Queen’s Beast Series of gold and silver bullion coins in 2016 with the most revered heraldic beast in the nation’s history, the lion. Today though, the 2019 release gets started with one of the oldest heraldic beasts in British history in the form of the White Falcon of the Plantagenets. The 2019 2 oz British Silver Queen’s Beast Falcon of the Plantagenets Coin is currently available to you for purchase online from JM Bullion.

King Edward III was one of the more prominent Kings of England to arise from the House of Plantagenets. The Plantagenet family originated around Anjou in France and came to the throne of England through Henry II in 1154. The family ruled for more than 300 years, coming to an end when King Richard III was killed at the Battle of Bosworth Field in 1485.

Edward III was fond of hawking and falconry and is said to have chosen the White Falcon as his official symbol as a result of this love. King Edward III was not the only Plantagenet monarch, or other monarchs of England, to use and appreciate the White Falcon. King Edward IV, the great-great-grandson of Edward III, used the seal. King Henry VII used the falcon in his seal and Henry VIII’s daughter, Queen Elizabeth I, also revered the badge.

On the reverse of 2019 2 oz British Silver Queen’s Beast Falcon of the Plantagenets Coin is the image of the White Falcon behind the shield most commonly associated with it. In this case, the shield reflects the one held by the falcon at the Queen’s coronation in 1953. The badge depicts a second white falcon inside of an open fetterlock, or padlock.

The obverse side of 2019 British Silver Queen’s Beast Falcon Coins bears the latest right-profile portrait of Queen Elizabeth II. Her Majesty has featured on British coinage since 1952 and this fifth-generation portrait was created in 2015 by Jody Clark, the same man designing all of the reverse images in the Queen’s Beast Series.

These 2019 2 oz British Silver Queen’s Beast Falcon of the Plantagenets Coins arrive in either individual packages, tubes of 10 coins, or Monster Boxes of 200 coins. The Monster Box contains a total of 20 tubes, and all coins in this listing are in Brilliant Uncirculated condition.

We encourage JM Bullion customers to contact us with questions when buying silver. You can call us at 800-276-6508, chat with us live online, or email us directly.

Steven from OH - October 06, 2018
"This is a great coin 2 ounces so it\'s a thick coin. Would definitely recommend. Another great buy from JM"