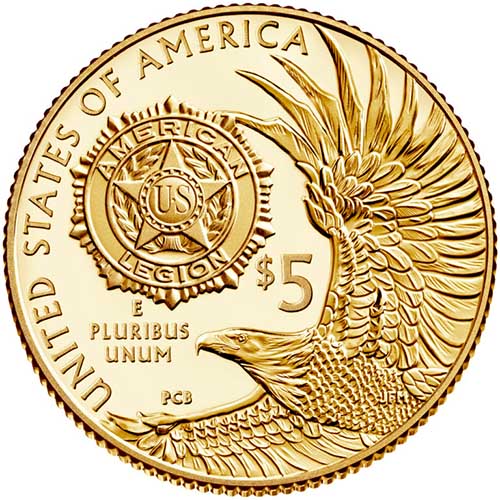 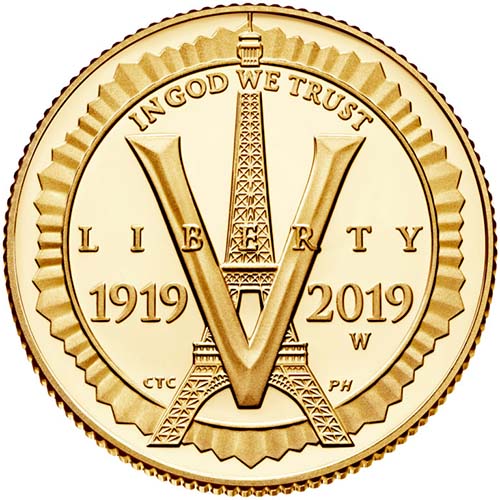 Each of the 2019-W $5 Proof American Legion 100th Anniversary Gold Coins in this listing is a proof specimen with matte design elements overlaying mirrored background fields. The coins in the proof series of this collection are available inside of protective capsules and a black presentation case from the US Mint. All coins come with a Certificate of Authenticity.

The American Legion’s stated aim is to support veterans’ affairs and rehabilitation following wars, promote National Security, support Americanism, and even get involved with children and youth in local communities. The American Legion was founded by US soldiers of the American Expeditionary Forces in Paris, France, on March 15, 1919.

On the obverse side of 2019-W $5 Proof American Legion 100th Anniversary Gold Coins is the image of the Eiffel Tower, a symbol of France known around the world that marks the group’s founding in Paris. There is a large “V” emblazoned over it that denotes the victory of American and Allied Forces over the Central Powers during the war.

The reverse face of 2019 Proof American Legion 100th Anniversary Gold Coins includes the design of an American bald eagle soaring through the sky, a well-known symbol for America during times of conflict and peace alike. Also featured on this side is the American Legion emblem, a badge with a five-pointed star. The badge includes an inscription of “US” at the center of the star with “American Legion” around the rim of the badge.

If you have any questions when buying gold, please feel free to contact JM Bullion. You can call us at 800-276-6508, chat with us live online, or email us directly.