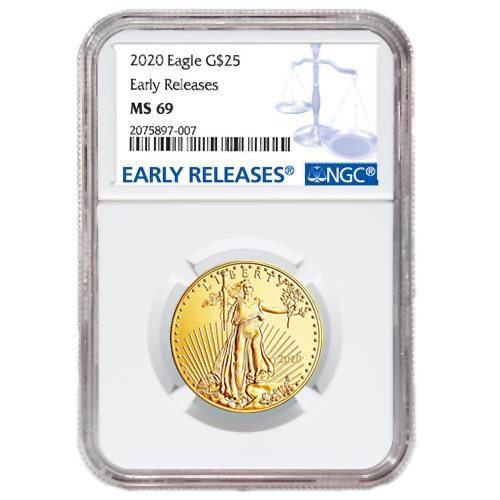 American Gold Eagle coins from the United States Mint feature four gold coin weights. Among these are 1 oz and three fractional-ounce options. The largest the fractional-ounce coins is the 1/2 oz gold coin that has been issued since 1986. Now, 2020 1/2 oz American Gold Eagle Coins are available to purchase online from JM Bullion with NGC certification.

Augustus Saint-Gaudens depiction of Lady Liberty is used on the obverse of all American Gold Eagle coins. The image of Liberty featured here is a front-facing portrait that depicts Liberty with a torch in her right hand and an olive branch in her left hand. Around her figure is a circle of 50 stars.

Miley Busiek created the image of American bald eagles on the reverse of 2020 American Gold Eagles. This design includes a female eagle and young hatchling in the nest, with a male eagle soaring above the nest.

These 2020 1/2 oz American Gold Eagle Coins are available today in near-perfect condition. The coins earned a Mint State 69 certification that indicates full, original mint luster and a maximum of two minor detracting flaws present. Acceptable flaws at this level include minuscule contact marks or hairlines only.

Early Release labels in the slab indicate that each coin arrived with the NGC or an approved third-party depository inside of the initial 30-day window of release from the United States Mint.

We encourage Silver.com customers to call us with questions at 888-989-7223. You can also connect with us online through our live chat and email address.