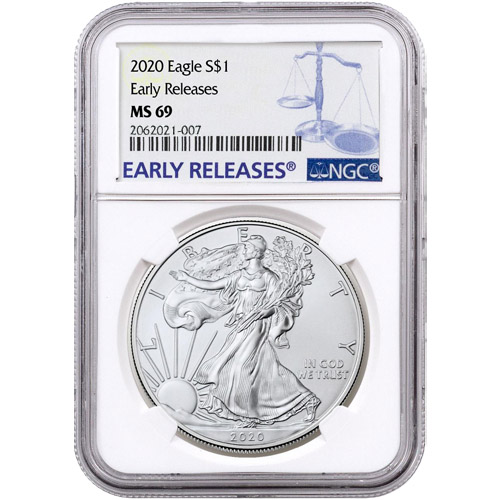 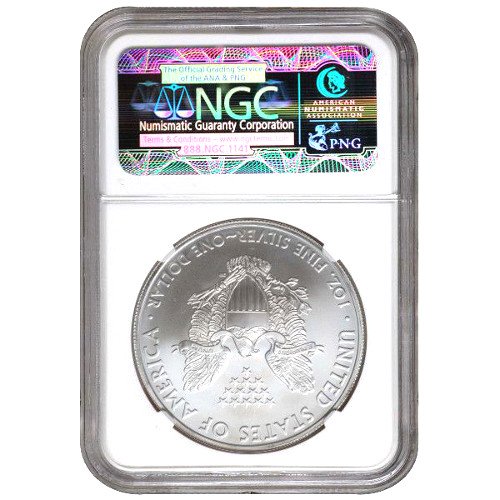 Each 2020 1 oz American Silver Eagle Coin available here comes with a near-perfect grade from the NGC. Coins in Mint State 69 condition exhibit full, original mint luster and no more than two minor detracting flaws. Acceptable flaws at this certification level include only minuscule contact marks or hairlines outside of the primary focal points of the coin.

Included with these coins is an Early Release label. Coins that earn the additional ER label must arrive for certification within a certain timeframe. ER coins are those received by the NGC or an approved third-party depository within the first 30 days of the initial 2020 release of American Silver Eagle coins.

On the obverse side of 2020 1 oz American Silver Eagle Coins is Walking Liberty. Designed in 1916 by Adolph A. Weinman, this iconic image featured on the Walking Liberty Half Dollar coin in circulation from 1916 to 1947. The design showcases Liberty in left-profile relief with the American flag draped over her shoulders as she walks toward the sun on the horizon.

The reverse of 2020 American Silver Eagle coins comes with the heraldic eagle of the United States. This version of the national emblem was first used in 1794 as created by Robert Scot. This modern version of the emblem was designed by John Mercanti in 1986 and features a powerful bald eagle with the national shield, arrows of war, and olive branch of peace.

If you have any questions, JM Bullion customer service is ready to help. You can call us at 800-276-6508, chat with us live online, or email us directly.