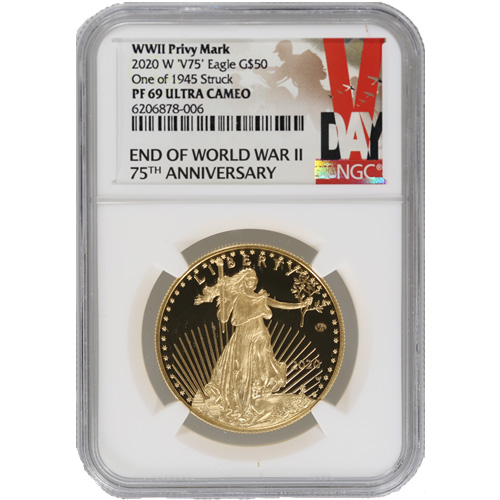 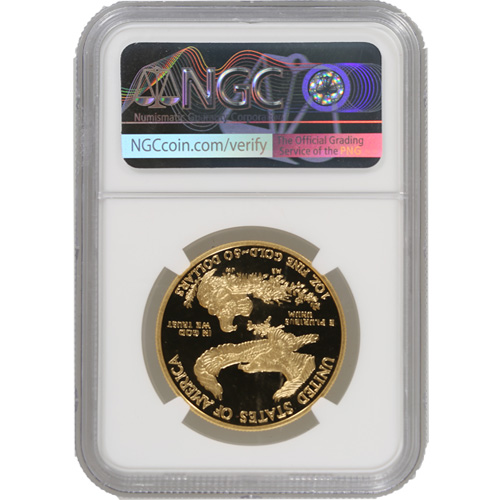 The United States Mint issued its coveted Proof American Eagles in 2020 with commemorative privy marks to celebrate the 75th anniversary of the end of World War II. The privy marks were issued on both the Proof Gold Eagle and Proof Silver Eagle, each one with its own commemorative mintage figure. Now, near-perfect 2020-W 1 oz V75 Privy Proof American Gold Eagle Coins are available to you for purchase online from JM Bullion.

From 1941 to 1945, the United States was engaged in World War II in both the Pacific Theater against Imperial Japan and in the European Theater against Nazi Germany. The entrance of the United States into the conflict definitively tipped the scales in favor of the Allies. The US had already been involved in the conflict by providing supplies and armaments to the Allied nations.

Liberty features on the obverse of 2020-W 1 oz V75 Privy Proof American Gold Eagle Coins. This design of Liberty was created by Augustus Saint-Gaudens in 1907 and has featured on the obverse of the Gold Eagle since 1986. The V75 privy mark is on this side of the coin and takes the shape of the Rainbow Pool at the heart of the National World War II Memorial.

An American bald eagle family features on the reverse of 2020-W V75 Proof American Gold Eagles. This design was created by Miley Busiek and features exclusively on the Gold Eagle Series from the US Mint.

These 2020-W 1 oz V75 Privy Proof American Gold Eagle Coins are in near-perfect condition. PF69 coins showcase full, original mint luster and no more than two minor detractions. These flaws are limited to minuscule contact marks or hairlines located outside of the primary focal points. The UCAM designation is for coins with strong, frosted designs and deeply-mirrored, clear fields.

JM Bullion customer service is available at 800-276-6508. We are also available online using our live chat and email address features.