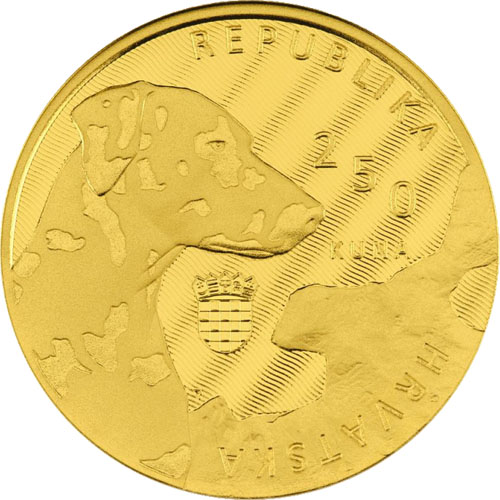 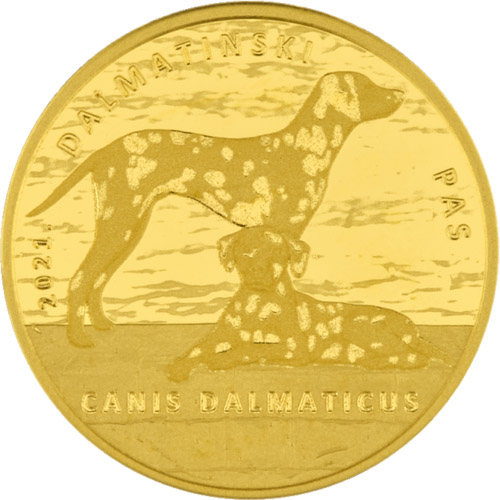 The Dalmatian dog has long been one of the world’s most famous and recognizable canine breeds, prominent in pop culture as everything from firehouse and rock band mascots to the subjects of films like 101 Dalmatians. Their actual history and provenance is no less fascinating than the lore that has sprung up around them, and is commemorated by the Croatian Mint and National Bank in the form of the 2021 1/4 oz Croatia Gold Dalmatian Dog Coin, a founding entry in the Autochthonous Croatia series.

The International Cynological Federation first recognized Dalmatian dogs as a native, or autochthonous, breed of Croatia in 1994, based on historical records and images dating back to the 16th century. These much-beloved dogs were notable from early on as energetic and alert working dogs who made excellent companions for both people and horses, and they became popular with American firefighters in the early 19th century during the era when firehouses relied on horse-drawn carriages. Their popularity has remained consistent, and even grown, ever since.

The 2021 Croatia Gold Dalmatian Dog Coin commemorates the famous breed with fine medallic artwork and an arresting brilliant uncirculated finish, making it a superb gift for special occasions or the numismatics enthusiast in your life. JM Bullion sends this item to you in beautiful themed box packaging and a secure protective case, accompanied by a Certificate of Authenticity signed by the governor of the Croatian National Bank. Each shipment is fully insured against loss or damage en route.

A sculpted portrait of the Dalmatian dog, created by noted medallic artist Nikola Vurag, is featured on the coin’s obverse. Its distinctive spots are crafted to echo the shapes of Croatia’s coastal island, while a partial map of the mainland and a stylized sea wave pattern form the backdrop. These elements are joined by the Cyrillic inscription “150 kuna,” the official country name “Republika Hrvatska,” and a coat of arms.

On the reverse is an image of two Dalmatian dogs posed gracefully in standing and reclining attitudes, along with the inscriptions “2021,” “Dalmatinski Pas,” and “Canis Dalmaticus.”

The team at JM Bullion is happy to answer your questions about gold coins for sale. You can phone us at 800-276-6508, reach us via our online live chat, or send inquiries by e-mail.