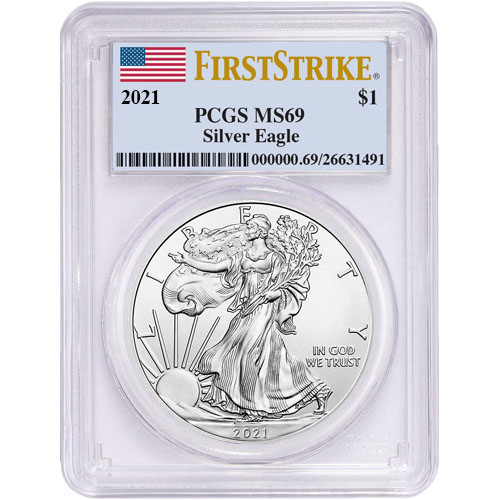 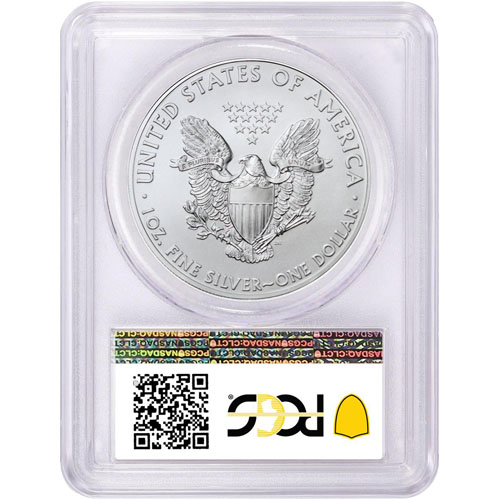 John Mercanti, 12th Chief Engraver of the United States Mint between 2006 and 2010, is the designer of the heraldic eagle featured on the reverse of the existing American Silver Eagle designs. He modified the heraldic eagle emblem in 1986 for the debut of the series. It is his design that will eventually be replaced in 2021.

The new design coming is from Emily Damstra, a famed coin designer who has worked with both the Royal Canadian Mint and the United States Mint in recent years. It will depict a bald eagle in flight with a large oak branch in its talons. However, this design is not planned to go into production until later in the year. As such, the initial batches of 2021 Silver Eagles will come with the original design combinations.

Walking Liberty is on the obverse of 2021 1 oz American Silver Eagles. This depiction of Liberty walking from right to left across the design element will continue to feature on the coins going forward and will be partnered with the new reverse design.

Americas heraldic eagle emblem can be found on the reverse of these 2021 American Silver Eagles. The heraldic eagle was first designed in 1794 by Robert Scot and has been modified several times for use on American coins. The eagle is in front-facing relief with the US national shield on its chest, arrows of war in one talon, and the olive branch of peace in the other.

These 2021 1 oz American Silver Eagles earned Mint State 69 certifications from the PCGS. Coins in this condition are near-perfect specimens with full, original mint luster and no more than two minor detracting flaws. Those flaws are limited in nature to minuscule contact marks or hairlines and limited in scope to the areas outside the primary fields of the coin. The First Strike designation is for coins received for grading within 30 days of the US Mints initial release.

JM Bullion customer service is available at 800-276-6508. You can also chat with us live online or email us directly with your inquiries.