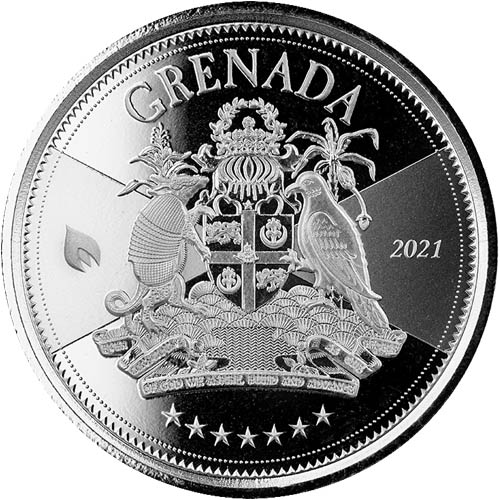 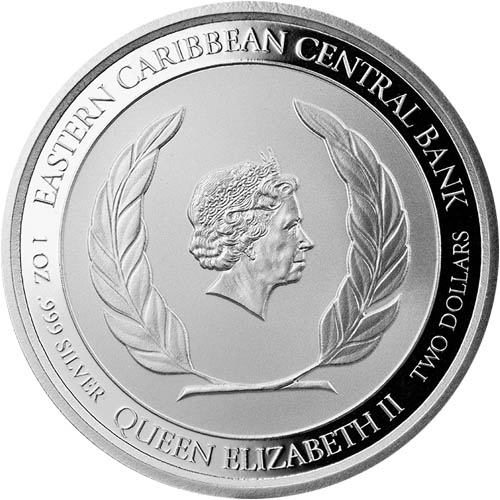 The 1 oz silver coins in the EC8 Series at the Scottsdale Mint represent eight of the island nations from the Caribbean Sea. In particular, the collection represents eight nations that turn to the Eastern Caribbean Central Bank as the monetary authority for currency control and stability. Today, 2021 1 oz EC8 Silver Grenada Coins are available to you online at JM Bullion.

The island nation of Grenada is one of the founding members of a group known as the Organization of Eastern Caribbean States. This group was founded in 1981 to foster intergovernmental organization between states in the region and better integrate the various economies of these countries. The OECS was founded, additionally, by Antigua and Barbuda, Dominica, Montserrat, Saint Kitts and Nevis, Saint Lucia, and Saint Vincent and the Grenadines. Alongside Grenada and Anguilla, these groups also formed the Eastern Caribbean Central Bank.

On the obverse of 2021 EC8 Silver Grenada Coins is a depiction of Queen Elizabeth II. Her Majesty is shown here in the popular Ian Rank-Broadley effigy that shows the Queen in right-profile relief. Designed in 1998, this portrait includes the Girls of Great Britain and Ireland Tiara on the head of Her Majesty. The field includes two large fern leaves flanking the Queen to provide a frame around her portrait.

The reverse side of 2021 1 oz Silver Grenada Coins comes with a vision of the national coat of arms. This design reflects the coat of arms as adopted in 1974. Grenadas seal includes a spade-shaped shield at the center with four quadrants. There is a passant guardant lion in the first and fourth quadrants, with a crescent moon and lilies in the second and third quadrants. The seal is supported by an armadillo and a pigeon.

Please feel free to contact JM Bullion with any questions. Were available to you on the phone at 800-276-6508, online using our live chat, and via our email address.