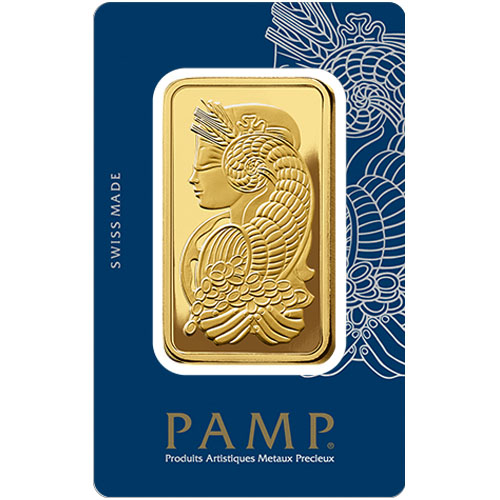 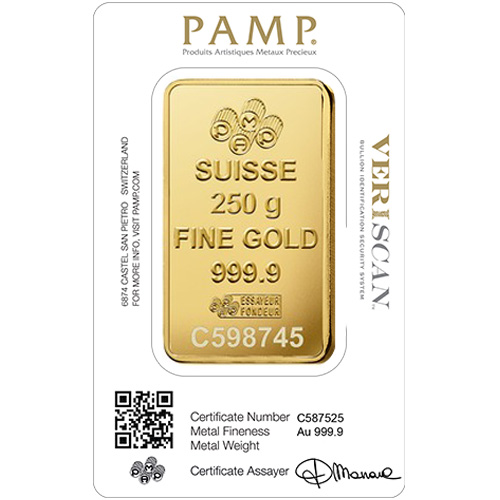 In Roman mythology, Fortuna was the goddess of fortune and luck. She was said to be the daughter of Jupiter, the Father of the Gods. Mankind was known to pray to her in times of need, and temples in her name are some of the oldest known to man.

While Fortuna was well known as the Roman goddess of fortune, she also held numerous other titles and roles in Roman culture. As a goddess she was not just considered influential over fortune, but also over bounty and a protector of grain supplies. In Roman religion, she was considered emblematic of luck.

PAMP Suisse is the world’s leading bullion brand. First established in 1977, the company’s full name is Produits Artistiques Metaux Precieux. The company is well known for its impressive designs, both PAMP-branded bullion bars and its popular Fortuna design of bars ranging in size from 1 Gram to 100 Troy ounces.

The obverse face of the 250 Gram PAMP Suisse Fortuna Gold Bar features the portrait of Fortuna. PAMP’s depiction shows Fortuna in left-profile relief and features a cornucopia atop her head that is overflowing with a bounty of riches that she catches in her clasped hands below.

On the reverse of the bar are the four circles containing PAMP as part of the PAMP Suisse logo. The engraving of the corporate name and brand logo are followed by markings that identify the weight, purity, and metal content of the bar, as well as the assayer’s mark and individual serial number for each bar.

PAMP Suisse is part of the multinational MKS Group. Originally founded in Ticino, Switzerland in 1977, it is now associated with the Geneva-based MKS Group, a multinational precious metal and financial services firm with offices around the world, including in the United States.

We encourage all JM Bullion customers to contact us with questions. You can call us at 800-276-6508, connect with us online through our live web chat, or simply email us with your questions.