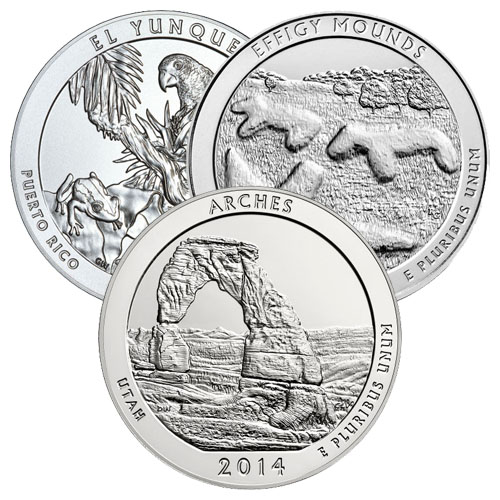 The largest silver coins for sale from the United States Mint are the 5 oz silver bullion products in the America the Beautiful Series. These coins replicate the appearance of the nation’s 25-cent piece on a much larger blank using .999 pure silver and fresh depictions on the reverse side representing each state, territory, and federal district of the United States of America. Now, 5 oz ATB Silver Coins are available to you at random from JM Bullion.

America the Beautiful launched in 2010 with five fresh designs for the year. The program is based on the circulation state quarters program. The latter offered representative designs for each of the states in the Union through 2009. The ATB Series follows the same concept with an investment-grade and collectible version of 5 oz silver coins available instead of circulation currency.

The bullion version of the coins have no mintage cap and are released with options that include individual capsules, tubes of 10 coins, or Monster Boxes of 100 coins originally. The burnished version has a distinctive finish compared to the bullion coin, lower mintages, and these ATB coins are housed inside of US Mint boxes with a Certificate of Authenticity.

On the obverse of all 5 oz ATB Silver Coins is the same design with each release. The left-profile bust of President George Washington is depicted here just as it still is on the US quarter. Washington’s bust was added to the quarter in 1932 on the 200th anniversary of his birth and remains there to this day. The design was created by John Flanagan based on a 1786 sculpture of Washington.

The reverse side of 5 oz ATB Silver Coins varies by year. There are five new designs released each year starting with the 2010 debut coins. The series concludes in 2021 with a single design released for Alabama and each reverse design reflects a national park, national forest, or historic monument found within a given district.

These 5 oz ATB Silver Coins are available to you with protective flips or plastic bags based on what is available at the time of purchase. JM Bullion offers these as random year, varied condition, varied design options. We’ll select your coin or coins at random once your payment processes. We cannot guarantee the condition of the coin you receive, the date mark it will have, or the design element it will feature.

We encourage JM Bullion customers to call us at 800-276-6508 with questions about silver for sale. You can also connect to us online using our live chat and email address features.