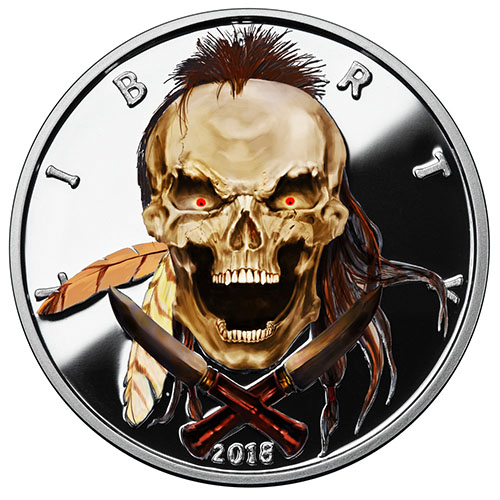 The Indian Brave Silver Round in the American Western Skulls Collection was the second release in a row to feature a design inspired by a fictional character from American film and the individual actor who portrayed that character. The Indian Brave is often portrayed simplistically in cultural lore about the Wild West, but the reality is the Brave was more complex. Right now, 5 oz Colorized Proof American Western Skulls Indian Brave Silver Rounds are available to purchase online from JM Bullion.

Each of the 5 oz Colorized Proof American Western Skulls Indian Brave Silver Rounds in this listing comes with a Certificate of Authenticity. The numbered COAs reflect the serial number engraved on the edge of each individual round, and the rounds are packaged inside of protective capsules.

The Indian Brave design featured in this collection draw inspiration in its imagery from the film The Last of the Mohicans. Itself inspired by a book, The Last of the Mohicans depicts a blood-thirsty brave out to kill Europeans and enemy natives. Known as Magua, the character is a Mohawk tribal member working to avenge his tribe’s losses.

On the obverse of the 5 oz Colorized Proof American Western Skulls Indian Brave Silver Rounds is the image of the Indian Brave, whose brown hair streaks down the center of his skull and includes two feathers woven into the back. The Indian Brave has one of the most fearsome facial expressions in the series, his mouth agape as he unleashes a war cry.

The Indian Brave was frequently depicted in novels, television series, and feature films as a blood-thirsty individual who would sooner kill anyone he came across than talk with them. In reality, braves were skilled hunters and warriors within their tribes and would often only fight if the survival of the tribe depended upon it.

American Western Skulls Collection silver rounds for sale have the same reverse designs. The fried eagle is depicted on the reverse side, which offers a deadly twist on the heraldic eagle of the United States. The design replaces the well-known American bald eagle with a dead bird.

If you have any questions, please contact JM Bullion. Our customer service team is available at 800-276-6508, online using our live chat, and via our email address. You can also find the current silver price on our website.