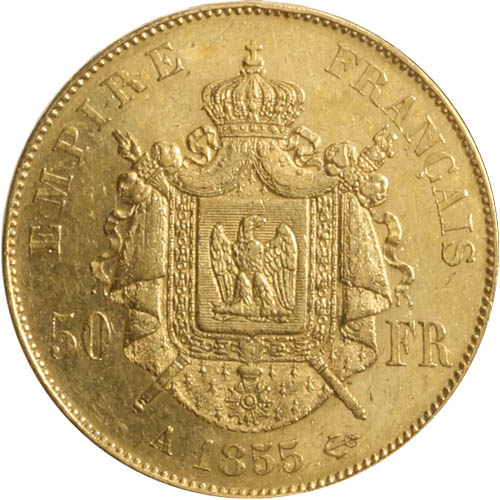 The Francs denomination was the Euro currency of its day. Issued in varying denominations on gold coins from France and Switzerland to Italy, Spain, and the Netherlands, the Franc was popular for its standardized weight and metal content, as well as it standing in various nations for use in trade. Today, 50 Francs Gold Coins are available to you online from JM Bullion from random years and countries.

The franc is a generic term used as a monetary unit of measurement. Its use originated in the mid-14th century among the Franks, the French kingdom of the day. Most of the 50 Francs Gold Coins in this product listing are based on the so-called Napoleons, French gold coins issued during the reign of Emperor Napoleon Bonaparte in denominations including 5, 10, 20, 40, 50 and 100.

All of the 50 Francs Gold Coins available to you in this product listing come with a protective plastic flip. Each individual coin is considered VG+, or a Very Good condition with improved visuals compared to a standard VG grade. Such coins have worn designs with slight detail still visible.

JM Bullion offers these coins today as a random year, random country option. We cannot guarantee the nation of issue or date mark for the coin you receive. All products are chosen at random once your payment has been processed. Please remember that purchasing multiples can result in receiving several coins with the same date mark and nation of issue.

One example of a popular 50 Francs Gold Coin you could receive is the 50 Francs Gold Coin of Napoleon III. He was the first democratically elected President of the Second French Republic and ruled from 1848 to 1851 in that role. He led a coup to overturn the Republic and re-establish the position of Emperor when the Second French Empire emerged in 1852. This lasted until 1870.

Designs on these 50 Francs Gold Coins feature a bare head left-profile of Napoleon III on coins issued during the Second Republic, while the same portrait is used on the coins of the Second Empire with the inclusion of a laurel crown on his head. The reverse of the coins during this era features a crowned shield with a single eagle on it. Coins from the Republic read Republic Francais while coins from the Empire read Empire Francais.

This is just one example of a design you could receive when purchasing 50 Francs Gold Coins here today. Remember that nations including Spain, Switzerland, Belgium, the Netherlands, and Italy issued their own 50 Francs gold coins at one time or another, in some cases uses their own legends and denominations on the coins.

Please feel free to reach out to JM Bullion if you have questions. You can call us on the phone at 800-276-6508, chat with us live online, or email us directly.