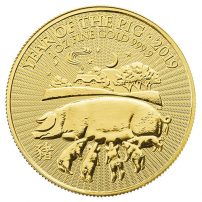 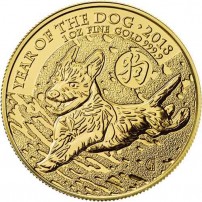 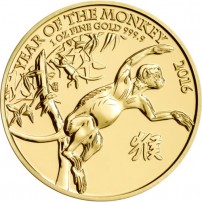 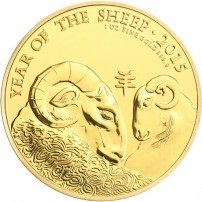 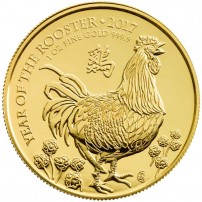 Lunar-themed coin programs are incredibly popular in the 21st century. The concept of design coins around the 12-year cycle of the Chinese Lunar Calendar, also known as the Zodiac, evolved at the Perth Mint when the latter introduced the very first Lunar Series in 1996. Today, notable sovereign mints including the Royal Canadian Mint and Royal Mint of England offer their own lunar collections for investors and collectors.

While the Perth Mint’s collection remains the most diverse series out there, it is not the only series to introduce stunning new designs with the changing years of the Zodiac. The Royal Mint of England introduced in its own lunar-themed series in 2014 and continues that collection today with a focus on the production of coins in 1 oz silver or 1 oz gold. Learn all about the British Gold Lunar Series of coins below!

The Royal Mint separates its collection of British Gold Lunar Series coins from those of other mints with the use of traditional Chinese Mandarin terminology in the naming of its collection. The Royal Mint’s lunar series is known as the Shengxiao Collection, with the latter term simply the Mandarin word used to refer to the Zodiac. Whether you call it the Shengxiao or the Zodiac, this 12-year calendar cycle focuses on the animals of the Chinese Lunar Calendar and the meaning of each sign to those born during its time.

British Gold Lunar Series coins debuted in the Shengxiao Collection in 2014 with the Year of the Horse design. The connection between the United Kingdom and China runs much deeper than one might expect, making it no surprise the Royal Mint issues a coin series in honor of Chinese culture and the thousands of British-Chinese citizens. The United Kingdom exercised governing control over the city of Hong Kong for much of the 20th century before returning control of the city to the People’s Republic of China. Additionally, the United Kingdom is home to the oldest Chinese community in Western Europe. Many of these individuals arrived in the UK as early as the first decade of the 19th century.

While some other lunar-themed collections have used different designers each year or run long enough that new designers have joined the team, to date the British Gold Lunar Series coins have been the brainchild of one artist working for the Royal Mint. Wuon-Gean Ho is of British-Chinese descent and was born in the United Kingdom. Raised in Oxford, her parents had moved to London in the 1960s from Malaysia and Singapore. Wuon-Gean Ho holds a degree in the History of Art from Cambridge University and studied traditional woodblock printmaking in Japan on scholarship in the city of Kyoto.

She returned to the UK to begin working in printing after she completed her studies in Japan and was commissioned by the Royal Mint in 2014 to create the first designs for the Shengxiao Collection. She has created all works for the collection available to date.

From the very first release, a great amount of care and attention to detail have gone into the Shengxiao Collection from the Royal Mint. Wuon-Gean Ho carefully studies the animal species to be featured each year and works out several prints before deciding upon the right animal and design for the release. Her works include:

While the reverse design of the coins changes from one year to the next to match the animal featured on the calendar, the obverse of all British Gold Lunar Series coins features the right-profile portrait of Queen Elizabeth II. To date, only two designs have been used depicting Her Majesty. The 2014 and 2015 issues of the coin had Ian Rank-Broadley’s fourth-generation effigy of the Queen from 1998 featured on the obverse. All coins issued after 2016 have Jody Clark’s definitive fifth-generation portrait that captures Her Majesty at the age of 89.

All coins in the British Gold Lunar Series collection have .9999 pure gold content and are considered legal tender coinage in the United Kingdom. Coins are issued a face value in Pound Sterling based upon their weight.

Each individual design she creates in the British Gold Lunar Series reflects not only the traits of the animal found on the Chinese Lunar Calendar in a given year and is also a living embodiment of Chinese traditions during the New Year’s celebration. Chinese culture traditionally sees people exchange gifts and tokens at New Years. In many cases, the gifts or tokens are actual money in red envelopes which embody good wishes for the recipient’s health, wealth, and prosperity. As such, the British Gold Lunar Series coins embrace that cultural tradition in an ideal manner.

If you have any questions about buying gold coins from this series, please feel free to ask. JM Bullion customer service associates are available to you on the phone at 800-276-6508, online using our live chat, and via our email address.