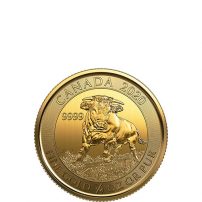 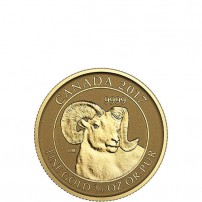 The Royal Canadian Mint is world renowned for producing some of the most beautiful, pure, gold and silver coins available today. The Big Horn Sheep is one of its greatest new designs, and this design is available from the RCM in some unique sizes in either precious metal. Right now, the 2017 ¼ oz Canadian Gold Big Horn Sheep Reverse Proof Coin is available to purchase fro... Read More 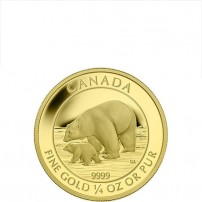 Any quantity available for $44.99 per coin over spot!

The Royal Canadian Mint loves to produce silver and gold coinage featuring images of its native wildlife. You'll consistently find the images of creatures such as the North American bison, the Grizzly Bear, and Cougar on gold coins for sale from the Royal Cana... Read More 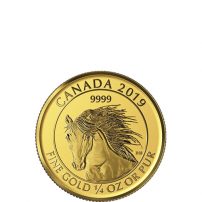 Any quantity available for $89.99 per coin over spot! 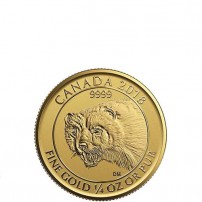 The Royal Canadian Mint produces some of the most elegant and sought-after gold coins for sale in the world. These products are often available in .9999 pure gold and feature designs that make them excellent as part of any collection. The Animal Portrait Series is among the newest collections, and continues with the wolverine release. Right now, 2018 ¼ oz Canadian Gold Wo... Read More 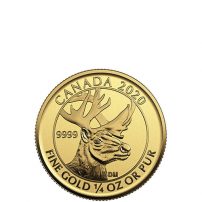 Any quantity available for $195.00 per coin over spot!

There are three primary species of caribou left in North America: the barren-ground caribou, the Alaskan caribou, and the boreal woodland caribou. The latter numbers roughly 34,000 across Canada and is a sedentary animal as opposed to its migratory cousins. No... Read More 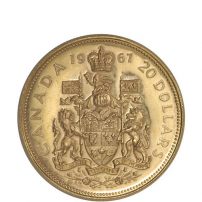 In 1867, the British colonial territories of Canada started a movement toward independence known as confederation. To mark the 100th anniversary of this movement in 1967, the Royal Canadian Mint issued commemorative coins with a bust of Queen Elizabeth II and the coat of arms of Canada. The bullion series offered BU and proof options for investors and collectors. Now, 1967... Read More 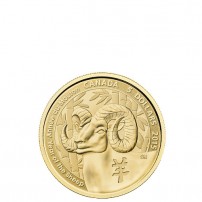 Limited Mintage of 2,888 Coins! The 2015 1/10 oz Year of the Sheep Canadian Gold Coin has been produced by the Royal Canadian Mint as part of their Zodiac collection. It is one of only 2,888 ever produced during its limited mintage, making it a highly sought after piece by both investors and collectors alike. Each coin is minted with 1/10 troy ounce of .9999 fine gold a... Read More 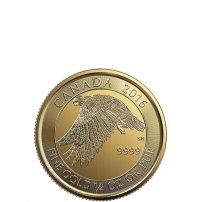 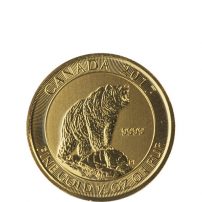 The grizzly bear is one of the most fearsome predators on the North American continent and it has no natural predator capable of taking it down. The scientific name for the grizzly, Ursus arctos horribilis, tells you all you need to know about these massive predators. The bear’s name literally translates as terrifying bear. The 2017 1/3 oz Canadi... Read More 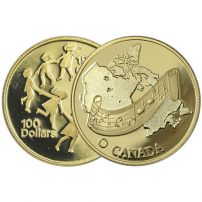 The Royal Canadian Mint is one of the world’s most respected minting operations. Though it is best known for the production of Canadian Maple Leaf coins, the official bullion coinage of the nation, it also handles the coining of various commemorative gold coins. Right now, 1/2 oz Canadian Gold Commemorative Coins are available to purchase online from JM Bullion from rand... Read More 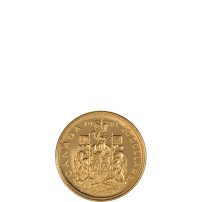 Canada began the movement toward independent governance separate of the United Kingdom in 1867 with a process known as confederation. This move sought to establish a federation between the British colonies of Canada. In 1967, the Royal Canadian Mint marked the centennial of this movement with $20 gold coins. Right now, $20 Canadian Confederation Gold Coins are available to... Read More 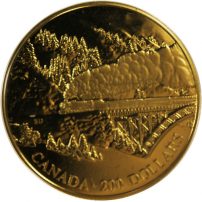 The Royal Canadian Mint has a rich history of gold coining that dates back more than a century. Founded in 1908, the mint has long produced circulation coins for the nation, and as of 1979, has been regularly issuing gold bullion coins for collectors and investors. Now, $200 Canadian Gold Commemorative Coins from varied releases are available to you for purchase online fro... Read More

The Royal Canadian Mint offers its own Lunar Series gold commemorative coins. Offered in variable weights, the 2015 1/10 oz Canadian Gold Year of the Sheep coin is one such example. The coin has a unique Year of the Sheep design on the reverse and Susanna Blunt’s fourth-generation portrait of Queen Elizabeth II on the obverse. These coins have a limited mintage of 2,888 coins only and were available only during the 2015 issue year.

This collection of Canadian commemorative gold coins debuted in 2017 and feature the images of various wildlife species from across Canada. Denis Mayer Jr. created the designs in the collection, with each coin containing ¼ Troy oz of .9999 pure gold. The coins have extremely low mintage figures of just 800 coins per design issue.

The first design issued in this collection was the 2017 ¼ oz Canadian Gold Big Horn Sheep Coin. With a similar, but different, design as the 2015 Lunar Sheep coin, this product depicts a Big Horn sheep on the reverse face. Bighorn sheep live in the wilds of Albert and British Columbia, calling the high peaks of the Canadian Rockies home throughout much of the year.

The 2018 ¼ oz Canadian Gold Wolverine Reverse Proof Coin is the 2nd coin from this collection. On the reverse is the depiction of a wolverine, the stockiest and most ferocious member of the weasel family. The coins have a beautiful reverse proof finish. A reverse proof coin has deeply-mirrored, clear design elements overlaying a strong, frosted matte background field for unique visual elements.

All coins in the Animal Portrait Series feature the same fourth-generation portrait of Queen Elizabeth II used on other Canadian gold commemorative coins. This right-profile portrait of the Queen is the fourth to feature on Canadian coins during her long reign and depicts the monarch for the first time since her father George VI without a crown.

The Royal Canadian Mint also issues commemorative gold coins with colorized lacquer finishes. These coins feature one-time designs commemorate various people, places, and moments. Each one is a proof coin and has a layer of colorized lacquer applied to the reverse design elements to bring a different visual appeal to the coins. One such example is the 2016 Canadian $100 Proof Gold Batman vs Superman: Dawn of Justice Coin. On these coins, the images of Superman and Batman are colorized to reflect their appearance in original DC Comic issues.

If you’re looking to collect unique gold coins, consider the purchase of Canadian commemorative gold coins. You can contact our customer service team with questions at 800-276-6508, chat with us live online, or simply send us an email with your inquiries.