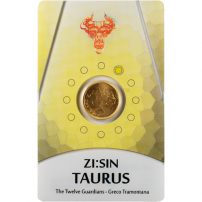 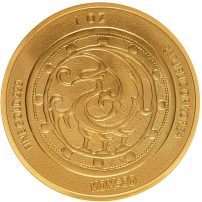 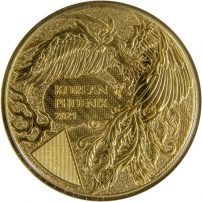 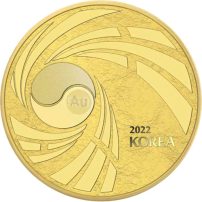 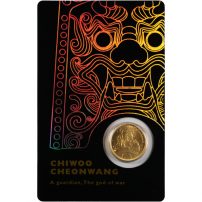 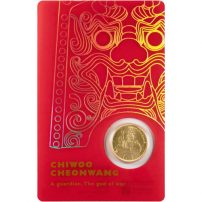 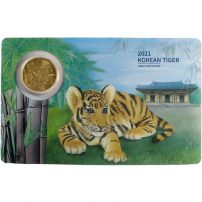 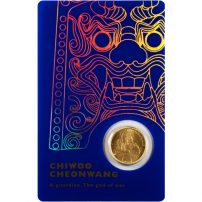 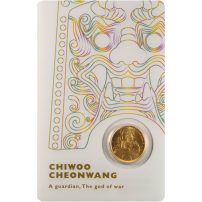 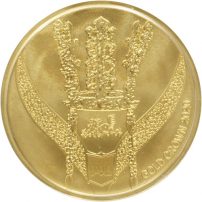 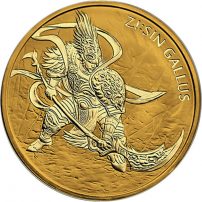 2017 1 oz South Korean Zi:Sin Gallus Gold Medal
As Low As:
Out of Stock 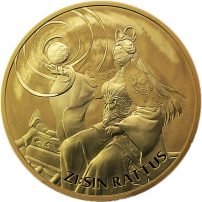 2020 1 oz South Korean Zi:Sin Rattus Gold Medal
As Low As:
Out of Stock 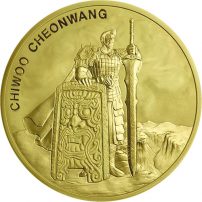 2019 1 oz South Korean Gold Chiwoo Cheonwang
As Low As:
Out of Stock 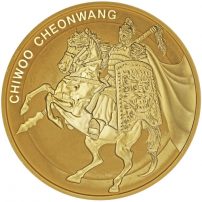 2017 1 oz South Korean Gold Chiwoo Cheonwang
As Low As:
Out of Stock 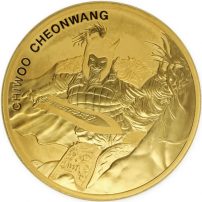 2018 1 oz South Korean Gold Chiwoo Cheonwang
As Low As:
Out of Stock 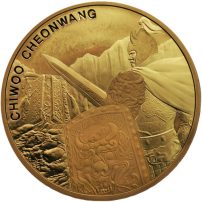 2020 1 oz South Korean Gold Chiwoo Cheonwang
As Low As:
Out of Stock 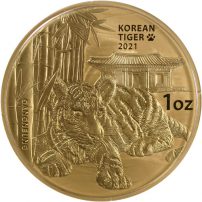 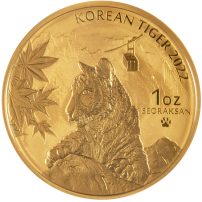 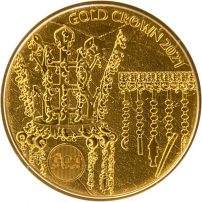 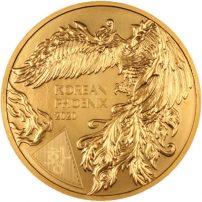 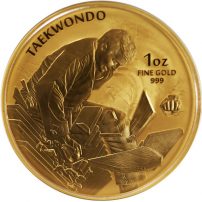 When buying gold online, there’s always something new you’ll find to purchase as an investment or collectible item. Coins such as those from the United States Mint, Royal Canadian Mint, or Perth Mint are immensely popular, and precious metal bars are refined by brands around the world such as PAMP Suisse. KOMSCO is the official minting operation of South Korea, and is responsible for striking coins and producing paper currency.

KOMSCO now has a selection of new silver and gold bullion coins available for sale. Among them are the Chiwoo Cheonwang Series and a new 12-design release honor the Twelve Guardians. Below you’ll find all the information you need to make a decision on buying South Korean gold coins from JM Bullion.

The design features of that original release depict the fearsome God of War standing on the ground bearing his traditional shield, wearing his feared mask, and brandishing a long spear in his right arm. On the face of his shield you’ll notice a depiction of the mask that traditionally covers his face.

Chiwoo Cheonwang’s myth stems from a period of Asian culture that is known as the period of 3 Sovereigns and Five Emperors. Stemming originally from Chinese culture, Chiwoo is said to have led tribes outside the sovereignty of the Yellow Emperor into battle against the Emperor and his people.

Flip the gold medal over and you’ll find a close-up, detailed depiction of Chiwoo Cheonwang’s shield. The image is surrounded by identifying engravings that include the year of issue, metal type, purity, nation of issue (Republic of Korea).

Korean lore talks of Chiwoo Cheonwang as the God of War. He is a fearsome deity who wears a demon-like mask, possess the ability to cast magical spells, and carries a large shield around with him and wears a mask engraved on the front. It is also said that Chiwoo Cheonwang has the power to control the weather. In the modern era, South Koreans know him as the Red Devil, or mascot of the national soccer team for South Korea. Fans of the team will wear a mock of his mask as a sign of support for the squad.

KOMSCO has adopted a design approach for the Chiwoo Cheonwang Series that is common in collections such as the Somalia Elephant Series from the Bavarian State Mint and the Chinese Panda collection from the Chinese Mint. Each year, KOMSCO releases its silver and gold Chiwoo Cheonwang medals with a new design on the reverse side. The designs are progressive in nature, following the God of War through an entire battle from preparation to conclusion. To date, the series has featured the following designs:

Along with a new design from KOMSCO on the Chiwoo Cheonwang medals in 2017, the series expanded to include the introduction of fractional-weight Chiwoo Cheonwang Gold Medals. Available only in a 1/10 oz weight, the medals were shipped packaged inside of an Assay Certificate from KOMSCO that featured the weight, purity, and diameter of each individual coin on the back.

KOMSCO took a unique approach to the packaging of the 1/10 oz medals. There was a total mintage of just 25,000 1/10 oz Chiwoo Cheonwang Gold Medals. The medals were offered inside of four different, colorized Assay Card packages. The mint broke down the mintage across these colors in different ways. Of the 25,000 gold medals struck:

The latest series of gold products released from KOMSCO comes in the Zi:Sin Series. These gold coins are part of a planned 12-design release that features new designs on the reverse with each of the coins issued. Known as the Twelve Guardians, the figures depicted on the reverse side of each new Zi:Sin gold coins represent the commanders of god’s army when it takes to the battlefield against the forces of evil.

Although each of the individuals featured is shown in the human form, they wear battle arm and regalia depicting mythical creatures. The images cover the figures from head to toe, and each one carries their own weapons on the sacred battlefield.

For the first release of the Zi:Sin Series you’ll find Gallus on the reverse. The 2017 1 oz South Korean Zi:Sin Gallus Gold Medal depicts the figure of Gallus. He is known as a messenger of light who can blind and frighten the enemies of god in a war, while also unleashing a powerful roar that deafens and further chases enemies from the battlefields. Gallus is also shown wearing a pointed helmet that gives him the power to gaze into the future and predict outcomes. Subsequent releases already available in the Zi:Sin Series of gold coins from KOMSCO include:

The Zi:Sin Series shares a common obverse design of Chiwoo Cheonwang’s battle shield. The image on the shield is that of Do ggae bi, a unique mythical figure known as a ghost, monster, or god to Korean people. His grotesque appearance is similar to that of the hob-goblin in Western cultures and was once hung at the ends of roof tiles to ward off evil spirts from entering the home. Other commonalities of the series include:

With 12 designs planned to represent each of the Twelve Guardians, KOMSCO has big plans for this series. The next planned release is that of Canis, a guider with intense loyalty and responsibility. Canis stands at the front of the army in battle leading the line in for god’s army.

For the gold medals from the Chiwoo Cheonwang and Zi:Sin Series, in particular, KOMSCO has a new obverse design element for the collection. The shield of Chiwoo Cheonwang remains the primary design element on the obverse of these and other KOMSCO gold medals, but the image of Do ggae bi that features here has changed. This new visual of Do ggae bi shows the beast with a smile on his face and enhanced visuals on other facial features. These include more prominent teeth, larger eyebrows, and flared nostrils. Horns have also been added to the head of Do ggae bi.

KOMSCO is one of many mints around the globe beginning to expand its offerings of low-mintage bullion for investors as the demand for precious metals rises. Two new collections made a debut in 2020 in the form of the South Korean Gold Phoenix and the South Korean Gold Crown. These collections have distinctive obverse and reverse designs, and do not share the Do ggae bi image used on other collections from the mint. Neither coin has a mintage cap on the release, with each one offering .999 pure gold in Brilliant Uncirculated condition. The details of these exciting new releases include:

What Does “Clay” Mean?

KOMSCO introduced the use of Clay for the first time with the Chiwoo Cheonwang Series. The use of 1 Clay refers to a concept of measurement meant to relate a certain amount of land. The mint describes it as “soil, earth, dirt, ground, or land.” The Chiwoo Cheonwang medals and Zi:Sin Series have no legal tender denomination attached, but the 1 Clay relates a value of 1 Troy oz of silver to a certain amount of land instead.

KOMSCO was founded through full investment from the National Treasure of South Korea under a special law enacted in 1951. Today, the mint is the sole currency manufacturer for the Republic of Korea, and it operates under the direct control of the government in Seoul. The primary function of KOMSCO is to manufacture banknotes, coins, national bonds, and various other securities issued by the government of South Korea. Additional services included the manufacture of currency safety bonds issued by the Bank of Korea, postage stamps, special government certificates, and any other special printed items for the government.

The mint operates a highly sophisticated facility in Daejeon, South Korea, where it places high priority on research and development, as well as innovation and evolution in security technology. The Gold Chiwoo Cheonwang medal is just one of the many brilliant products manufactured by KOMSCO on an annual basis.

JM Bullion customer service is available to assist you with any questions on the phone at 800-276-6508. You can also reach out to us live online through our chat service or simply send us an email with your inquiries. If you have questions about Payment Methods, we encourage you to read our relevant FAQ and then contact us with any remaining questions.