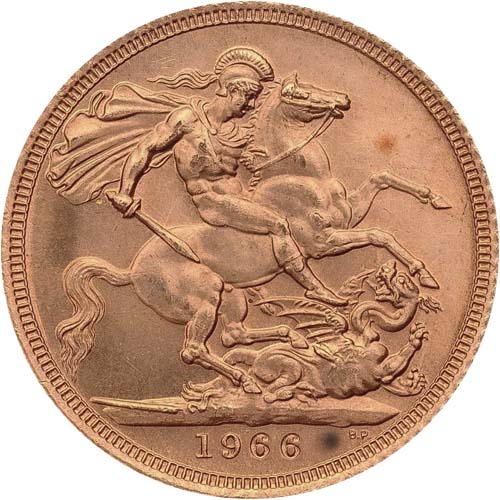 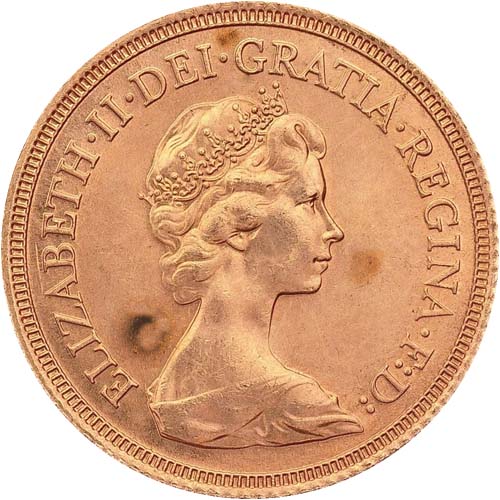 As low as $51.00 per coin over spot!
Add to WishlistLog In to add this product to your Wishlist
Free Shipping on $199+ Orders

Each Great Britain Gold Sovereign Coin available to you in this product listing ships inside of protective plastic to ensure its condition and the quality of the design. These gold sovereigns all feature the effigy of Queen Elizabeth II, the longest-reigning monarch of England. Her figure has appeared on gold sovereigns since the 1953 issue year.

Given the length of her reign, there are five potential portraits of the Queen which could appear on the obverse of the Great Britain Gold Sovereign Coin you receive in this product listing. From 1953 to 1967, the first-generation depiction of a young Queen Elizabeth II with youthful, optimistic imagery is featured. This was created by Mary Gillick.

Coins in the gold sovereign range issued from 1968 to 1984 included the Arnold Machin portrait. This second generation design was similar to Gillick’s depiction, capturing a youthful Queen Elizabeth II. The primary difference here was the addition of a crown atop her head. From 1985 to 1997, the gold sovereigns bore the third-generation design by Raphael Maklouf that is considered the most regal of the portraits.

The most common Great Britain Gold Sovereigns of Elizabeth II’s reign are those with the fourth-generation portrait created in 1998 by Ian Rank-Broadley. This design was in use from 1998 to 2015 and was replaced in 2016 by Jody Clark’s fifth-generation design of the Queen at age 89.

If you have any questions, please feel free to contact JM Bullion. Our customer service team is available to you at 800-276-6508, online using our live chat, or via our email address.

Charles from MD - December 13, 2018
"I just received a 1981 Sovereign and paid a little extra for Queen Elizabeth II. Another beautiful coin from JM Bullion."