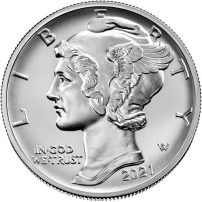 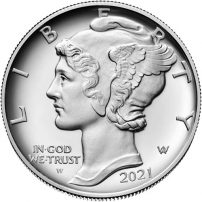 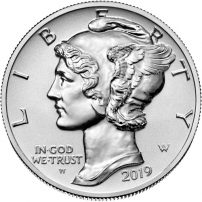 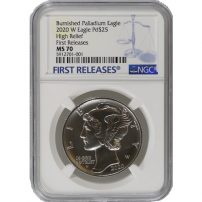 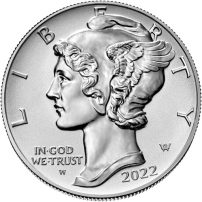 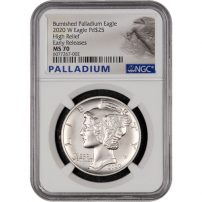 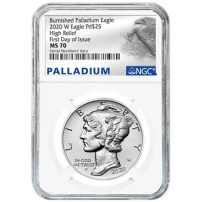 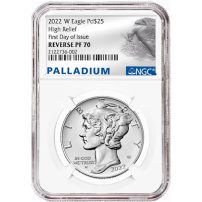 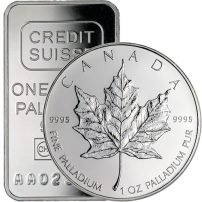 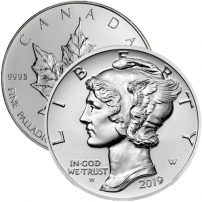 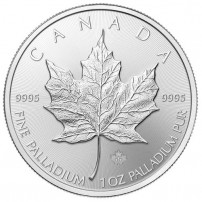 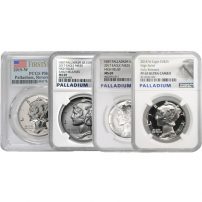 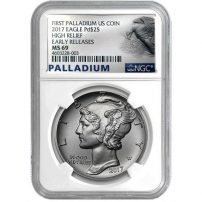 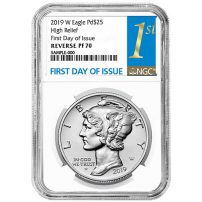 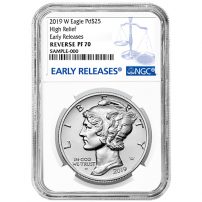 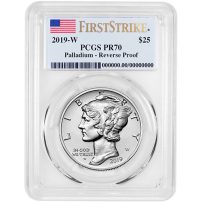 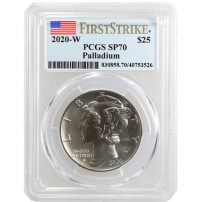 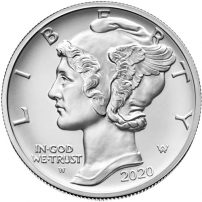 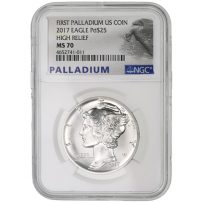 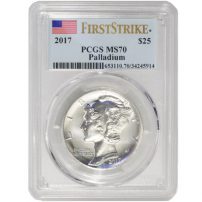 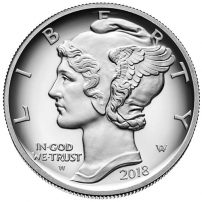 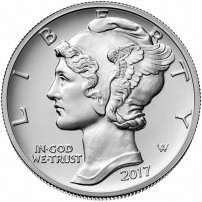 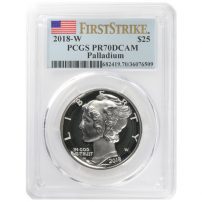 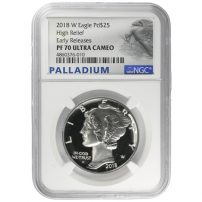 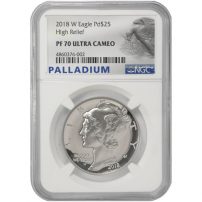 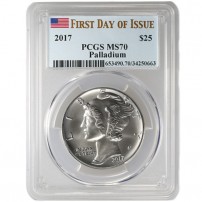 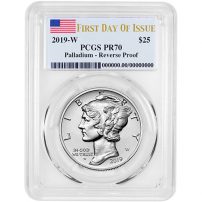 Precious metal investors often turn first to the popular metals in the industry when buying gold and silver coins, bars, and rounds. However, palladium is quietly becoming one of the go-to precious metals as prices trend upward in the 21st century and the variety of available products continues to grow. One of the fastest-growing sectors for palladium comes in the form of palladium bullion coins. In recent years, new palladium coins have been introduced and previously canceled programs are making a comeback as demand for the metal increases.

Palladium is defined as a “rare and lustrous silvery-white metal.” In appearance, it is similar to both silver and platinum. The latter is understandable as palladium is one of the metals in the platinum metals group. It was first discovered in 1803 and named for the asteroid Pallas, which is associated with the Greek goddess Athena who herself used Pallas as an epithet. Like platinum, most of the world’s palladium supply is directed toward the production of catalytic converters used in the automotive industry. Among its fellow precious metals in the platinum metals group, palladium has the lowest melting point and is the least dense.

Palladium’s Demand in the 21st Century

Palladium remained largely unknown as a precious metal in the investment sector until the 21st century. The prices of palladium were, historically, flat when compared with other investment-grade metals. However, the rising demand for fuel-efficient and economically-friendly automobiles lead to increased use of catalytic converters in automobiles. These components within the internal combustion engine of cars convert some 90% of harmful gases created during operation to less-harmful substances to release into the air.

The vast majority of palladium goes into the production of catalytic converters today. The remainder of it is used in industrial applications, jewelry, and now the precious metals investment market. The first palladium coins were issued in 1966 by Sierra Leone and 1967 by Tonga. Other nations to issue early palladium coins included France, the Soviet Union, Canada, Portugal, China, and Australia. However, these were all commemorative coins issued with low mintages or on a one-time basis. Production of palladium bullion coins wouldn’t take place until the 21st century.

The Canadian Palladium Maple Leaf coin is widely recognized as the first major palladium bullion coin. It was introduced in 2005 by the Royal Canadian Mint, but was only struck initially through 2007 and once again in 2009. The coins were not issued in 2008 and halted from 2010-2014. The Royal Canadian Mint reintroduced the Canadian Palladium Maple Leaf coins in 2015 with the same standards and options originally offered.

Canadian Palladium Maple Leaf coins are available only in 1 Troy oz palladium with .9995 pure content. The coins have a face value of $50 (CAD) and feature the same designs as all other coins in the Canadian Maple Leaf Series. On the obverse of the coins is the effigy of Queen Elizabeth II, which for Palladium Maple Leaf coins has always been the right-profile portrait created in 2003 by Susanna Blunt as the fourth-generation Canadian design.

Because of the varied dates of availability for the Canadian Palladium Maple Leaf during its two-plus decades in production, it is most common for JM Bullion to carry this coin in varied listings. In this type of listing, we offer the 1 oz Canadian Palladium Maple Leafs in Brilliant Uncirculated condition, but from variable years of issue. We have a wide range of them in stock, but are not able to guarantee a date mark in advance. As such, it is considered a variable listing.

After seven years of waiting and debuting exactly two decades after the last addition to the American Eagle Series, the American Palladium Eagle was first released by the United States Mint in 2017. The American Eagle Palladium Bullion Coin Act of 2010 authorized the production of an official palladium bullion coin as part of the existing American Eagle Series. The coins in this series debuted in 1986 with the Gold Eagle and Silver Eagle, later expanding in 1997 to include the Platinum Eagle. The Palladium Bullion Coin Act was passed by the 111th US Congress and introduced with two historic design elements on its obverse and reverse fields.

On the obverse of all 1 oz American Palladium Eagle Coins is an image known as Winged Liberty. This left-profile portrait of Liberty was created in 1916 by Adolph A. Weinman and originally featured on the Mercury Dime, as the US Dime of that era was colloquially known. The image of Liberty includes a winged Phrygian cap on her head and inscriptions of “Liberty,” “In God We Trust,” and “2017.” You will also find the initials “AW” on this side in honor of Weinman.

His original design of Liberty on the US Dime, officially known as the Winged Liberty Dime, became known among Americans as the Mercury Dime. This was due to Liberty’s similar appearance to the Roman messenger god, Mercury.

The reverse face of American Palladium Eagles comes with another design from Weinman, but not one that was ever used on American coinage. Rather than using the reverse from the Mercury Dime, the US Mint stuck to its American Eagle focus in the series with a 1907 design Weinman created for the American Institute of Architects medal design. This design features a powerful bald eagle perched on a cliff as it clutches sapling in its talons and beak. The inscriptions on this face of the coin include “United States of America,” “$25,” “1 oz. Pd .9995 Fine,” and “E Pluribus Unum.”

The US Mint has issued all of these versions, and an additional option not regularly issued in the others. Each year of availability to date in this series has featured a different version of the coin. These included the following options:

All of the American Palladium Eagle Coins produced between 2017 and 2020 were issued by the West Point Mint. However, only the Proof, Reverse Proof, and Burnished coins feature the “W” mint mark on the obverse field of the coins. This mint mark is found below “In God We Trust” near the neckline of Liberty.

The proof coin has the traditional proof visuals of any coin that include frosted design elements overlaying mirrored fields. The 2019 release of a reverse proof delivered the exact opposite in the visuals, with mirrored design strikes over frosted background fields. The 2020 burnished coin brought the clean, matte elements of other US Mint burnished coins to the new American Palladium Eagle Series.

One of the earliest palladium coin collections released in the modern era was the Russian Palladium Ballerina. Designed to capture Russia’s national fascination with the strength, beauty, and determination of the Moscow Ballet, the coins feature new images of ballerinas at work with each date mark. Issued from 1989 to 1995, the coins also had the hammer-and-sickle design of the Soviet Union on the other side each year. Even after the fall of the Soviet Union in 1991 and the establishment of the new Russian Federation, the coins continued to use the Soviet-inspired design until its conclusion.

Throughout its release, the Russian Palladium Ballerina was issued as a Brilliant Uncirculated and Proof specimen, with weights available of 1 oz, 1/2 oz, 1/4 oz, and 1/10 oz, though the fractional-ounce coins were not issued with great regularity or in great numbers. The proof series was the most likely to feature the fractional ounce coins with each date mark.

Like investment-grade coins in other metals, palladium coins are available originally in Brilliant Uncirculated condition from the issuing mint. From time to time though, you may find certified palladium coins available to purchase as well. Most of these have the certification of the Professional Coin Grading Service or Numismatic Guaranty Corporation. The coins are most commonly assigned one of the top-two certifications on the Sheldon numeric scale:

From the American Palladium Eagle to the Canadian Palladium Maple Leaf, don’t hesitate to reach out to JM Bullion with questions when buying palladium. Our customer service team is available at 800-276-6508, online through our live chat, and using our email address. You can also turn to our Payment Methods FAQ page for quick answers to common questions regarding payment methods and purchasing maximums/minimums.