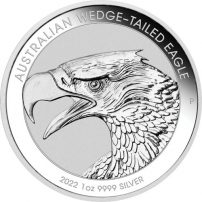 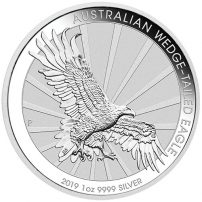 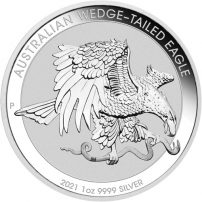 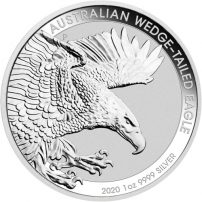 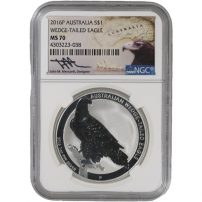 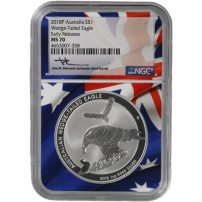 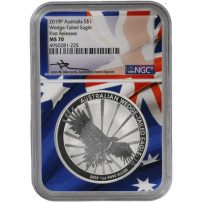 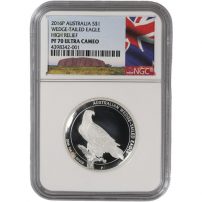 Australia’s Perth Mint is famous for producing gold and silver coins for sale with wildlife found on the continent. Some of the species featured on Perth Mint coinage are endemic to the continent of Australia, while others are prominent, but also found on neighboring nations in the South Pacific. The Australian Silver Wedge Tail Eagle coin is a popular issue from the Perth Mint that features a unique connection to the United States, which issues the most popular eagle-themed coin in the form of the American Silver Eagle.

The Wedge Tail Eagle coinage from the Perth Mint has an interesting design history. The Perth Mint authorized the production of these coins for a 2014 debut. The design used on the reverse side of the 2014 and 2015 coins was the same. In this design, you’ll notice a wedge tail eagle in flight as it returns to its perch on a tree branch in the bottom-left corner of the design field. The eagle has its wings spread wide to slow its flight and its talons outstretched the grasp the branch upon its landing. The 2014 and 2015 coins featured this design along with engravings of “Australian Wedge-Tailed Eagle” and “1 oz .999 Silver.” The coins also feature the “P” mint mark of the Perth Mint and had these engravings along the left and bottom of the design rim.

For 2016, the Perth Mint issued a new design for the Australian Silver Wedge Tail Eagle which was used on the 2016 and 2017 coins. In this design, the wedge tail eagle is featured standing on the same branch for its perch as seen in the previous issues, but this time the bird has its wings down at its side and a bold, on-guard look as it searches for prey and threats around it. The engravings of the year of issue, weight, purity, and metal content were shifted to the lower-left of the rim. “Australian Wedge-Tailed Eagle” is now engraved along the upper-right field of the rim and the “P” mint mark is out of the design field and in the bottom-center of the design rim.

Another change took place in the 2016 and 2017 releases, but this one had nothing to do with the design. The Perth Mint boosted the silver content of the coins from .999 in 2016 to .9999 pure silver in 2017. This continues into the 2018 design, which has again been altered by the Perth Mint to continue catching the eye of collectors.

For the 2018 Australian Silver Wedge Tail Eagle, the reverse field includes a family design. There is a small hatchling in the nest with a female eagle as a male eagle flies into the design in the background with its wings spread out at its side. “Australian Wedge-Tailed Eagle” is engraved along the upper-left, “2018 1 oz 9999 Silver” along the bottom, and the “P” mint mark in the outer rim on the right.

All of the Australian Silver Wedge Tail Eagle Coins released from 2014 to 2018 feature the same obverse design. The Perth Mint continues with the use of the fourth-generation Queen Elizabeth II effigy from Ian Rank-Broadley. Designed in 1998 for the Royal Mint of England, this image captures the Queen around the age of 70 as she wears an intricate crown upon her head.

In 2019, the Perth Mint unveiled the fourth new reverse design in the series as the collection entered its sixth year of availability. 2019 has proven to be a landmark release in this collection for two reasons. Not only does the coin have a new image of the Wedge Tail Eagle on the reverse, but it features a new effigy of Queen Elizabeth II on the obverse for the first time in its brief history.

The reverse of 2019 Australian Silver Wedge Tail Eagle Coins includes the depiction of this powerful aerial predator high in the air with its wings spread wide and its talons out, no doubt ready to swoop down on some unsuspecting prey. Behind the creature’s figure, rays of sunlight burst out toward the edges of the design field. Look closely and you’ll notice John Mercanti’s “JM” initials in the wedge-shaped tail feathers of the bird.

On the obverse, the Australian Silver Wedge Tail follows in the footsteps of all major 2019 silver bullion coins from the Perth Mint. The sixth portrait of Queen Elizabeth II to ever feature on Australian coinage debuts on 2019 date marked bullion. This right-profile portrait is based on Jody Clark’s fifth-generation design for the Royal Mint of England. This effigy features the image of Her Majesty at the age of 89 wearing the Royal Diadem crown. Unlike its British counterparts, this design includes the Queen’s neckline and shoulders, a feature not used on Australian coins since 1966.

Mintage and Information on the Australian Silver Wedge Tail Eagle

Connection to the United States

The Perth Mint’s Australian Silver Wedge Tail Eagle coin is unique in a variety of ways, and none of those is more interesting than the man behind the design of the Wedge Tail Eagles each time a new design comes out. John Mercanti, the 12th Chief Engraver of the United States Mint (2006-2010), designs the Wedge Tail Eagles for the Perth Mint. Mercanti has created all designs to date and was responsible for countless projects during his three-decade career with the United States Mint which started at the Philadelphia Mint. Among his greatest contributions is the modernized heraldic eagle of the United States depicted on the reverse of the American Silver Eagle coin.

If you come across questions as you look to buy silver, please feel free to reach out to us at 800-276-6508. JM Bullion customer service is also available to you online using our live chat and email address.