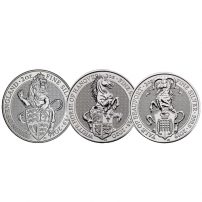 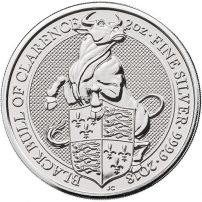 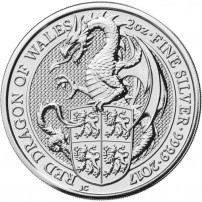 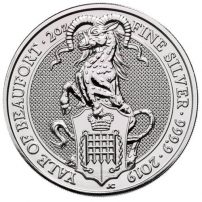 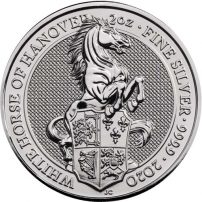 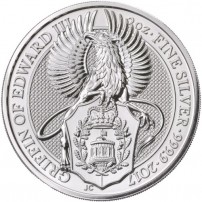 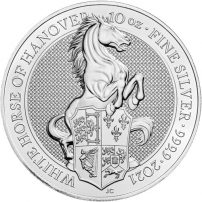 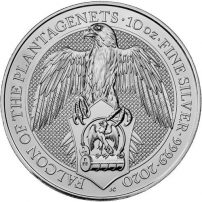 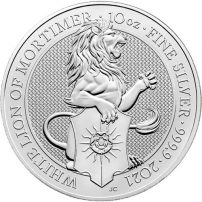 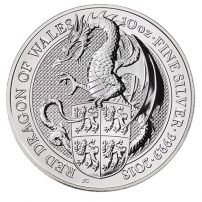 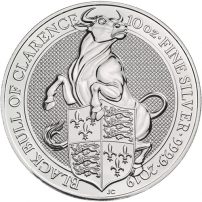 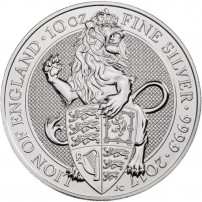 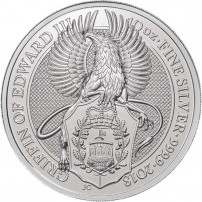 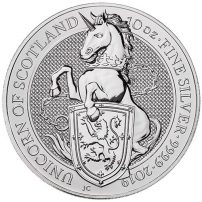 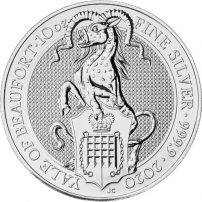 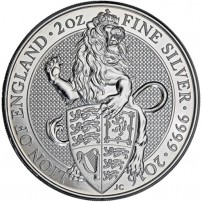 2016 2 oz British Silver Queens Beast Lion Coin
As Low As:
Out of Stock 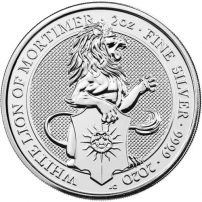 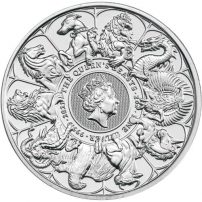 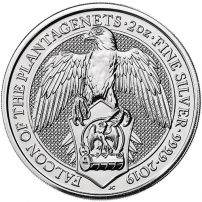 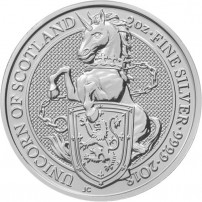 2018 2 oz British Silver Queens Beast Unicorn Coin
As Low As:
Out of Stock 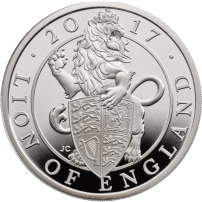 The Royal Mint of England is well-known for producing its annual Britannia coin series in gold, silver, and platinum. The mint also issues commemorative bullion coins for both investors and collectors with .9999 silver and gold content. The Shengxiao Series is one example and represents the Lunar Collection from the Royal Mint. The newest coin series from the Royal Mint is one which has captured the attention of numismatists around the world. Introduced in 2016, the Silver Queen’s Beast Coins sell out quickly from the Royal Mint.

In the Silver Queen’s Beast Series from the Royal Mint, there are a total of 10 designs to be released between 2016 and 2021. The release schedule for the mint has changed in terms of the designs available, but the planned release cycle remains the same. The 2016 coin debuted on its own, with two designs per year in 2017, 2018, 2019, and 2020, and one final release again in 2021. Explore the designs and creatures in the Silver Queen’s Beast collection!

Background on the Queen’s Beast Series

Available in silver and gold from 2016, with platinum introduced in 2017, the Queen’s Beast Series of coins from the Royal Mint features both bullion and proof options. The Queen’s Beast coins are inspired by the heraldic beasts that fill the history of the British monarchy. For more than one thousand years, the royal arms and personal seals of various monarchs have been used, abandoned, or otherwise integrated into the royal collection of heraldic beasts.

As it pertains to Queen Elizabeth II, the Queen’s Beast Series features a total of 10 designs in homage to the statues of these fantastical creatures which stood guard over the doors of Westminster Abbey in 1953 when Elizabeth II entered for her official coronation ceremony as the Queen of England. Those original statues were carved by sculptor James Woodford who was paid £2,750 for the work. His original works are kept to this day at the Canadian Museum of History in Gatineau.

All Silver Queen’s Beast bullion coins contain .9999 pure silver content with a face value of £2 (GBP). The coins ship inside of protective packaging, mint tubes of 10, or Monster Boxes of 200 coins. The proof coins have .999 pure silver content and the same face value, but are shipped inside of commemorative display boxes with a Certificate of Authenticity from the Royal Mint.

The silver and gold coins in the Queen’s Beast Collection share the same designs with each release. The Royal Mint does not have a set release schedule for its designs and follows a different schedule for its bullion and proof releases. The collection started with the release of the Lion of England in 2016. England’s modern royal arms still features three lions, making this beast the most important heraldic beast in the nation’s history. The lion is also one of the earliest animals to appear in the royal arms. A traditional symbol of bravery, strength, and valor, the lion was first recorded in British history as part of a gift given to Geoffrey Plantagenet by King Henry I when he married the king’s daughter Matilda. That original seal was a blue shield with three small golden lions.

Following the release of the Lion of England in the Queen’s Beast Series, the Royal Mint issues these impressive designs in the 10-coin series:

On the obverse of all silver Queen’s Beast coins is the image of Queen Elizabeth II. Her Majesty’s fifth-generation portrait appears on all coins in this collection. Created in 2015 by Jody Clark of the Royal Mint, this design depicts the Queen at the age of 89 wearing the royal diadem crown on her head. The coins issued from 2018 onward have a background design known as guilloche on the obverse, which enhances anti-counterfeiting efforts in the series with the use of a background that mimics the look of braided ribbons.

The Lion of England was the first coin released, and as mentioned earlier it first debuted in a bullion version in 2016 followed by a proof option in 2017. The Royal Mint has carefully expanded the availability of silver Queen’s Beast coins as the popularity of and demand for these coins has grown. Overall, the collection launched with 2 oz silver, 1 oz gold, and ¼ oz gold bullion coins in 2016.

The proof coins launched with the 1 oz, 5 oz, 10 oz, and 1 kilogram silver coins in 2017. The design releases have varied in the early years from the Royal Mint. The bullion coinage featured an initial release schedule of the Lion of England, Griffin of Edward III, Red Dragon of Wales, Unicorn of Scotland, and the Black Bull of Clarence. The proof coins, conversely, issued designs on a schedule that featured the Lion of England, Unicorn of Scotland, Red Dragon of Wales, and the Black Bull of Clarence.

If you have any questions when you buy silver with us, please don’t hesitate to ask. JM Bullion customer service associates are available to help you on the phone at 800-276-6508, on the web using our live chat service, and via our email address.