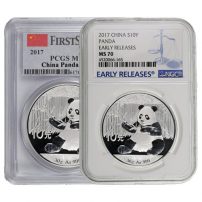 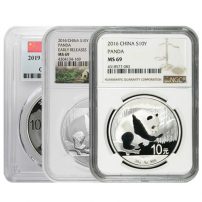 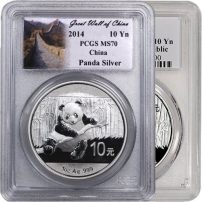 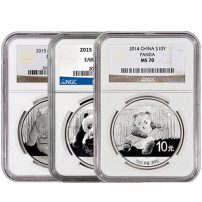 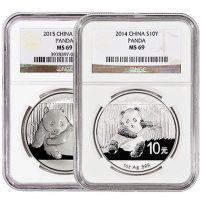 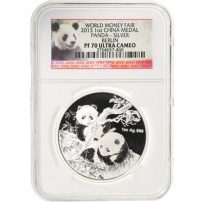 Whether you’re a first-time precious metal buyer or a seasoned pro, choosing a coin to feature in your collection, give as a gift, or add to your investment portfolio is a tricky task. You want to buy the highest quality coin for the price and have your investment look beautiful too, and for many, the Chinese Silver Panda coin may do just that.

Introduction to the Chinese Silver Panda

The Chinese Silver Panda coin is a popular collector’s item and has been printed annually since its release in 1983. Originally produced by the Shenzhen-Guobao Mint of China primarily for countries in Asia, the coin has grown in popularity and is now in high demand internationally — including in the United States. Each year features a different design. The 2014 Chinese Silver Panda depicts a young panda and a bamboo branch, and it has an intricate background of bamboo. The new 2015 Chinese Silver Panda Coin is set to also feature a single Panda however it will contain a slightly different design. Each coin contains one troy ounce of .999 purity silver, making it a perfect buy for collectors, gift givers, or investors.

The Shenzhen Guobao Mint is operated under the People's Bank of China, which is the central bank of China. This company oversees currency and coin production at the Shenzhen-Guobao Mint, which produces a variety of gold, silver, platinum, and palladium bullion, along with special commemorative coins or collector’s items, such as the Chinese Silver Panda.

Since the Chinese Silver Panda coin is produced in a new iteration each year, the grades available vary widely and include: uncirculated, proof, gilded, colored, and privy marked. The uncirculated coins will usually grade between MS 66 and MS 70, the most pristine grading of an uncirculated coin. The first Chinese Silver Panda coins, produced from 1983 to 1985, were only produced in proof quality, and were made of 27 grams of .900 fine silver, as opposed to the one troy ounce of .999 pure silver with which they are made today.

The coin was released every year since its start, excluding 1986. Different from American minted coins, the Chinese Silver Panda bears no mintmarks to distinguish mint of origin. In some circumstances, slight variations in the size of the date imprint will allow coin experts to identify the mint of origin, such as in 1996, when different mints in China produced Silver Pandas with small variations of font size on the obverse side of the coin.

Collectors and investors alike are interested in the Chinese Silver Panda, not only because of its intricate, artistic design, but also because of its cultural history, coming from a country steeped in tradition and legend. This cultural history is represented in the design itself. The obverse side of the coin features the Temple of Heaven with “People’s Republic of China” in Chinese characters. The bottom of the coin bears the year of issue, and if it is a commemorative issue, the theme of the coin is marked on the bottom, as well. The reverse side of the coin changes every year to feature a new representation of the beloved Chinese Panda, except for 2001 and 2002, which carry the same panda design.

Mintage varies depending on year, and most years produce between 50,000 and 8,000,000 coins. Years with lower mintages, namely the first few years that the coin was run, are more difficult to find in high quality, and thus they will be more expensive. Years with higher mintages are easier to find and order in bulk. Coins are shipped to you individually, in sheets of 30, or in monster boxes of 600. JM Bullion will ship your order securely and discreetly and handle your coins with the utmost care — whether you buy six coins or 600.

Uncirculated current year coins are available online for a competitive price, and that price is lowered when you buy sheets of 30 coins or monster boxes of 600. Uncirculated coins with MS 65 to MS 70 grades are rather common, which is good news for collectors, considering that a grade of MS means no abnormalities or flaws to the coin under 5x magnification.

The Chinese Silver Panda is highly collectible due to its yearly released design. Have fun finding them all, or starting now and buying them as they are released as a way to commemorate the year. However you decide to collect or invest your coins, rest assured that JM Bullion will give you the information and service that you need to choose which coin is right for you. So, what are you waiting for? Check out the Chinese Silver Panda coin today!