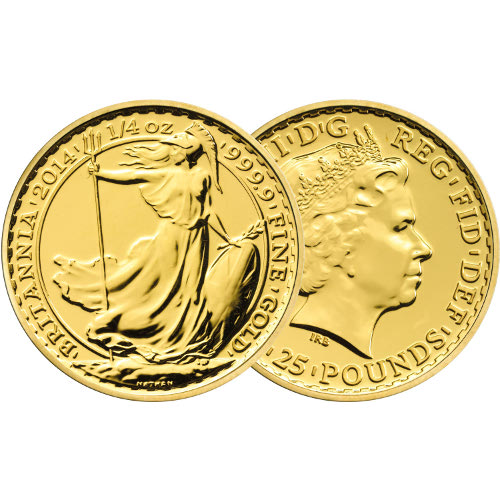 These 1/4 oz Gold Britannias come from the Royal Mint of Britain, and feature .9999 gold purity and a 25 Pound face value. We have these 1/4 oz Gold Brits in stock and ready to ship. Please note that these coins will come with dates of our choice, but will be like-new coins in Brilliant Uncirculated condition.

The Britannia coin from the Royal Mint is a popular bullion product, both in Europe and around the globe. Britannia has served as a symbol of Britain for almost two thousand years. It was only natural that the image would eventually be used on coins struck in the country.

The term Britannia originated during the time of the Roman Empire. As the Romans sought to conquer the British Isles, the term Britannia came to be used in the Latin language to describe the island itself. Later on during the Roman conquest, the term took on additional uses. The most common was as a term to describe both the island and the region as part of the Roman Empire. Eventually, the term became associated with the people of Britain.

Each of these 1/4 oz British Gold Britannias available today have the potential to be unique in their own right. These coins are available from various years of minting. As a result, the images of Queen Elizabeth II on the obverse could vary, as could the gold content of the coin. Since ascending to the thrown in the 1950s, Queen Elizabeth II’s portrait on coins has been updated three times, the latest coming in the early 2000s. Additionally, all Gold Britannia coins struck before 2013 are 91.67% gold. Coins struck during 2013 and after are .9999 fine gold.

On the reverse side of each 1/4 oz. British Gold Britannia is the image of Britannia herself. The image is different depending upon the year of minting, but she is commonly depicted holding a trident and shield, with a Corinthian helmet on her head. Queen Elizabeth II’s right-profile portrait, designed by Ian Rank-Broadley, always graces the obverse side of British Gold Britannia Coins.

If you have any questions on the 1/4 oz Gold Britannias, please feel free to give us a call at 800-276-6508 or use our live chat feature to get in touch immediately.

Christian from UT - March 09, 2015
"The Britannia is one of my favorite coin designs so I was excited to receive my package. I was sent a 2014 coin. The coin does not come in a capsule so you may want to buy one. I will definitely be buying a few more."