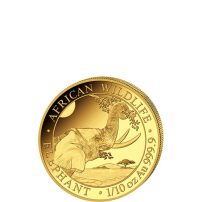 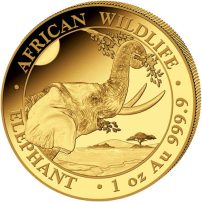 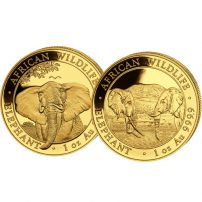 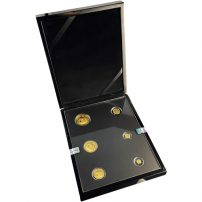 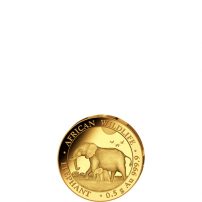 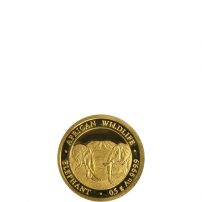 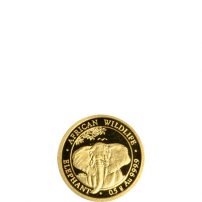 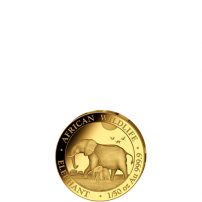 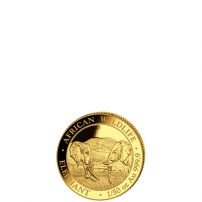 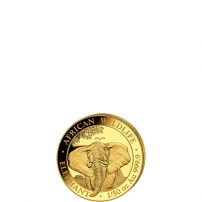 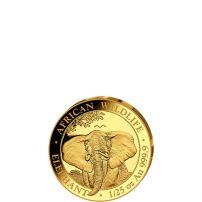 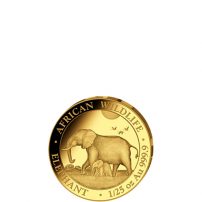 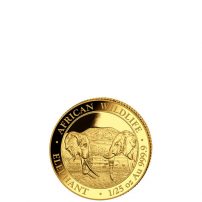 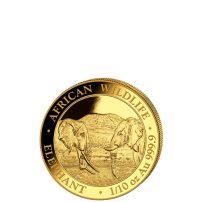 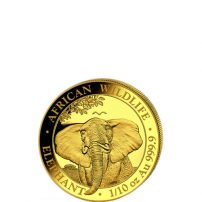 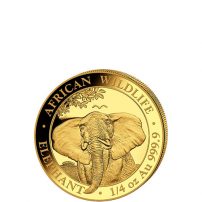 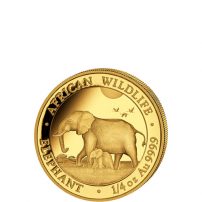 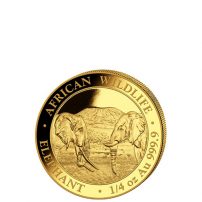 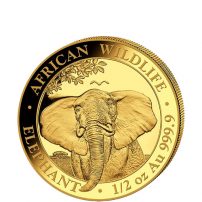 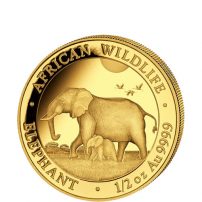 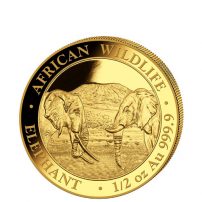 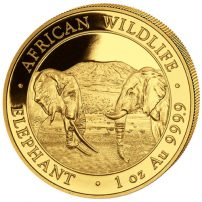 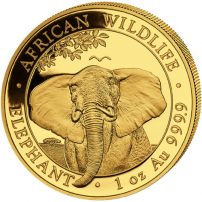 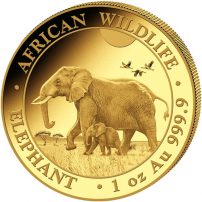 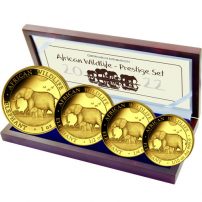 Few coins have enjoyed the meteoric rise in popularity that the Somalian Elephant Coin from the Bavarian State Mint has experienced. First released in 2004 as a silver coin, the most diverse program in the Somalian Elephant Coin series is now the Somalian Gold Elephant. Introduced much later than its silver counterpart, the gold coins have quickly made up ground by diversifying to include bullion and proof finishes, with numerous fractional-weight coins struck and even combination coins featuring silver and gold.

Evolution of the Somalian Elephant Coin

The Somalian Elephant coins are among the most intriguing produced in the world today, in part because of the mystery behind the evolution of these coins. It starts with the name of the series the coins come from, the African Wildlife Series. While it would seem to indicate a robust series of coins celebrating multiple species commonly found on the African continent, the elephant is the only animal to appear on a coin branded with the African Wildlife Series title.

Adding to the intrigue of the coin was its original production as a coin for the nation of Zambia. Although the specific coins in question, Somalian Gold Elephants, date back to 2004 as a series, the elephant made its first appearance on African Wildlife Series coins in 1999. From that year until 2003, these coins were struck with the same characteristics and branding by the Bavarian State Mint with Zambia as the nation of issue.

As mentioned above, the Somalian Elephant coins were introduced in 2004 in a silver bullion version. The coins were produced in extremely limited mintages for the first five production years, 2004 to 2008. In each of these five production years the Bavarian State Mint capped mintage for the coins at just 5,000. The coins were immediately popular among investors and collectors for their beautiful, intricate designs and impressive .999 purity levels.

It didn’t take long for the popularity of these coins to lead to the growth of the program. Answering the initial demand for the coins and their design features, the Bavarian State Mint opted to introduce a gold version of the coin, as well. The Somalian Gold Elephant was introduced in bullion and proof, with various fractional-weight coins available. Additionally, the mint eventually introduced a silver coin with gilded 24-karat gold designs on the reverse side of the coins.

The most common Somalian Gold Elephant coin is the 1 oz weight. Featuring the same design sets found on its silver counterpart, the popular 1 oz coin is available in both a bullion and proof version. The proof series of the coin is the more interesting as it is offered in a wide range of weights, from the unusual 1/50 oz coin and 1/20 oz coin to the larger 5 oz gold proof. The latter is a particularly rare coin in the series as the Bavarian State Mint only produces 99 of these on an annual basis.

In the case of the gilded 24-karat gold coins, the Somalian Elephant is technically classified as a silver coin. The blank that starts the production process is a .999 pure silver blank, onto which the annual elephant design is struck. From there, the coin’s reverse design of the elephant is covered in a brilliant 24-karat gold layer. These gilded coins are a newer product from the Bavarian State Mint, with the availability limited to coins from 2013-2015.

All Somalian Gold Elephant coins share the annual reverse design set of the silver coins in the series, while the obverse bears the same images from year-to-year.

Part of the intrigue of the Somalian Gold Elephant coin among collectors is the ever-changing design set featured on the reverse of each coin. Every year since the introduction of the coin series in 2004, the Bavarian State Mint has altered the design of the African elephant used on the reverse side of the coin. There are common characteristics of the design set from one year to the next. The motif always focuses on the elephant in its natural habitat on the African continent, but the specific design is never the same.

The hallmark of the Somalia Gold Elephant collection is the use of a new design on the reverse face of the coins each year. For example, on 2020 Somalia Gold Elephant Coins, the Bavarian State Mint issued the coins with two adult African bush elephants on the reverse side of the coins. The pair stair directly at one another with the peak of Mount Kilimanjaro looming in the distant background.

Beyond the design motif each year, there are common engravings that appear on the reverse each year. The design set is featured inside the inner circle of the coin’s reverse, with engravings of “Elephant,” “African Wildlife,” and the coin’s weight, metal content, and purity surrounding the image.

On the obverse side of all coins in the series, regardless of version (bullion or proof), metal content (silver or gold), and size, are heraldic images representing the nation of Somalia. From the first year of production, the coat of arms for the nation of Somalia has been featured in the middle of the obverse design. In the design, a pair of leopards hold up a shield that contains a singular star against a background of horizontal lines. Above the design is the engraving “Somali Republic.” The year of minting is split into two digits on either side of the shield, for example, “20,” “15.” Below is the face value of the coin.

While Somalian Gold Elephants are struck with a face value of Somali Shillings, their status as legal tender has long been an issue of contention.

Numerous dealers list the Somalian Gold Elephant coin as a bullion product with a face value of 1,000 Shillings (1 oz Gold Coins), but its status as a legal tender coin is murky at best. The Bavarian State Mint has a government letter of authorization to produce these coins on behalf of the nation of Somalia from an individual named Barbatunde Bobulobolou. At the same time, the governor of the Central Bank of Somalia denies that the coins have any legal or official standing in the nation.

In any event, the status of the coin as legal tender in Somalia is in jeopardy more as a result of constant political strife in that nation than as a result of competing forms made available to the Bavarian State Mint.

What is certain about the Somalian Gold Elephant is that it is struck to meet the highest standards of coining in the world. Each of the coins possesses .999 pure gold, and is struck to meet the precise international standards for coins at each of the sizes available. For example, the 1 oz Somalian Gold Elephant contains exactly 1 troy ounce of gold, with a diameter of 1.6 inches.

Investors and collectors alike covet these coins for their purity and quality of design, not to mention the changing design sets that make each production year’s coining unique.

If you have any questions about buying gold in the Somalia Gold Elephant Series or want to know more about our shipping policies, don’t hesitate to contact JM Bullion. You can call us at 800-276-6508, chat with us live online, or simply send us an email with your inquiries.