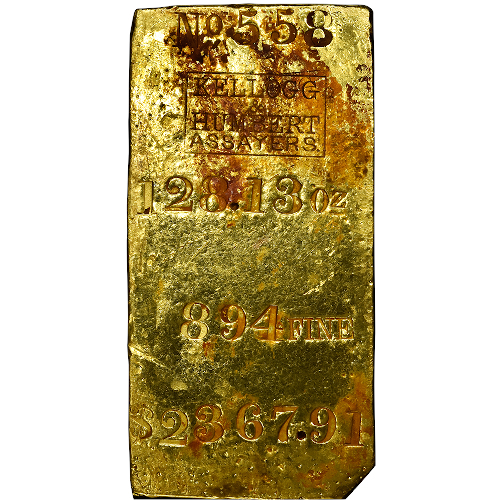 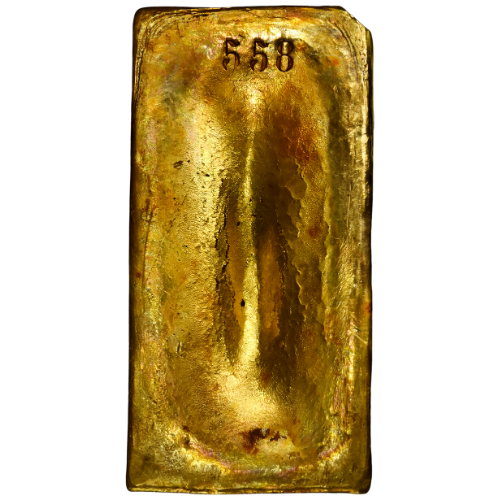 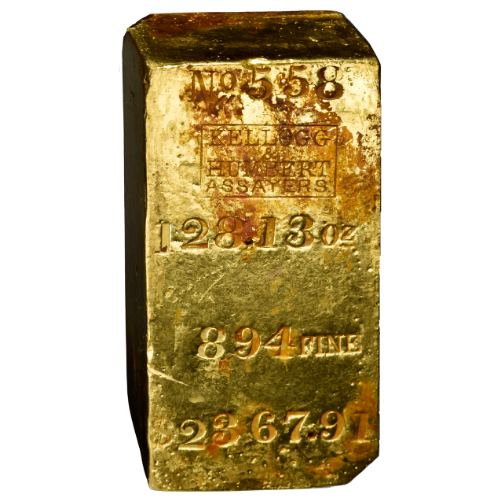 This is a truly rare opportunity JM Bullion is pleased to offer. This 128.13 oz SS Central America Kellogg & Humbert Assayers Gold Bar spent more than a century on the floor of the Atlantic Ocean at a depth of more than 7,000 feet. Over the course of a century in the icy Atlantic waters, this gold bar developed an orange and reddish-brown patina. The overall visual field of the gold ingot comes with some of the bright-yellow gold as it originally appeared still present in the bar, along with the aforementioned visual patina.

JM Bullion has the rare chance to offer up this individual 128.13 oz SS Central America Kellogg & Humbert Assayers Gold Bar. This stunning gold ingot weighs 128.13 Troy oz in total, with 114.548 Troy oz of .894 gold content within the metallic composition of the bar. The gold ingot is secured in a clear, hard plastic case surrounded by foam inserts inside of a black carrying case. Produced in early 1857, this individual gold bar has stamped details up and down the face of the bar.

The obverse side of the 128.13 oz SS Central America Kellogg & Humbert Assayers Gold Bar comes with various stamped markings. At the top of the bar is a unique serial number. In this case, a gold ingot with the serial number 558 is available to purchase. The rectangular frame of Kellogg & Humbert Assayers appears beneath the serial number. You will also find the weight in Troy oz of the ingot, its purity level, and the 1857 face value of the gold bar. In 1857, these bars were worth $2,367.91.

The gold used in the production of this stunning, historic ingot came from the California Gold Rush discoveries of gold in the west. The bar was assayed and marked by Kellogg & Humbert in San Francisco in early 1857 and loaded onto the SS Sonora for the voyage to Panama. The gold ingot was part of a large batch transferred via rail across the isthmus of Panama and reloaded onto the SS Central America. The Central America departed Panama in early September 1857 headed for New York City.

Please feel free to reach out to JM Bullion with questions about this one-of-a-kind, rare gold ingot salvaged from the SS Central America. You can call us with questions at 800-276-6508, chat with us live online, or simply send us an email with your inquiries.