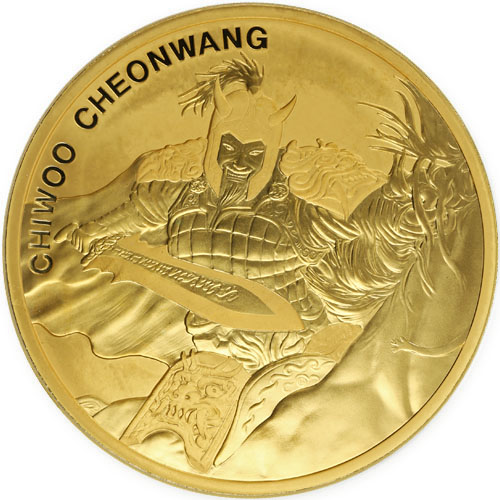 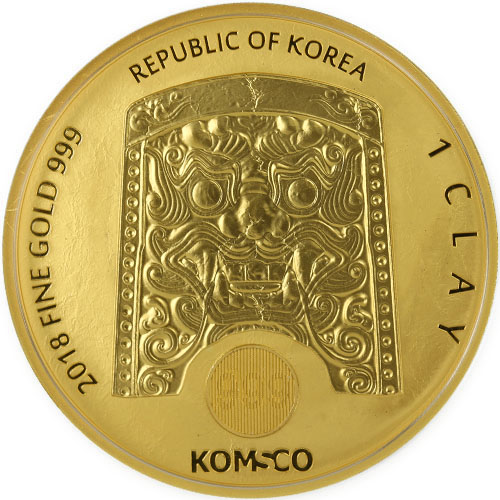 The popular Chiwoo Cheonwang series from KOMSCO celebrates the figure known simply as Chiwoo, a man who was a central figure in Chinese and Korean culture. An individual worthy of the phrase “the man, the myth, the legend,” Chiwoo is praised for his real-life battlefield accomplishments and mythical attributes associated with him. Right now, 2018 1 oz South Korean Gold Chiwoo Cheonwang medals are available to purchase online from JM Bullion.

Each of the 2018 1 oz South Korean Gold Chiwoo Cheonwang medals in this listing represent the third release and third new design of the collection. The gold bullion coins available to you here are featured inside of a protective plastic capsule from KOMSCO.

The Chiwoo Cheonwang collection of gold and silver bullion medals debuted in 2016, and since that issue year, the mint has used a new design of Chiwoo on the reverse with each year of release. This is the closest to the figure of Chiwoo the collection has come with the features of his face visible as he rides into battle.

On the reverse of the 2018 1 oz South Korean Gold Chiwoo Cheonwang is the figure of Chiwoo on horseback. The man known as a God of War has an intense look on his face as he wields a massive sword while riding his horse into battle. He wears a full suit of armor and a helmet with two horns.

Chiwoo Cheonwang the man was a tribal leader of the Nine Li tribe in ancient China and is known as one of the three founding fathers of China. He is well-known for fighting against the future Yellow Emperor and showcasing his own prowess on the field of battle. It is in the fog of war that Chiwoo Cheonwang the legend emerges. He is rumored in some texts to have had the power to control the weather, summon fog, and even possess 4 eyes and 6 arms.

The obverse of all 2018 1 oz South Korean Gold Chiwoo Cheonwang medals features the shield of Chiwoo which bears the image of Do ggae bi, a mythical creature said to ward off evil spirits. The latent security image is found on this side below the shield, as are engravings of the mint of issue, nation of issue, year of issue, metal content, purity, and value of the coins.

If you have any questions, please feel free to ask. JM Bullion customer service associates are available at 800-276-6508, online using our live chat, and via our email address.

Dale from - April 12, 2019
"I got this item when I purchased a 1 oz. Gold Coin, Random Year, Varied Condition, Varied Mint. I was initially disappointed because it is a medal, not a coin as I was led to believe by the description on the website. However, on second look I realized how utterly gorgeous it is and decided to keep it rather than return it and request a coin. I don\'t know how the shades of color of the gold were achieved, but they are breathtaking and make for a truly beautiful piece of work."