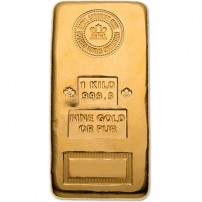 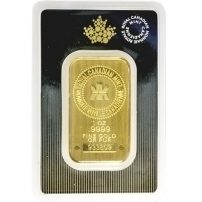 RCM, better known as the Royal Canadian Mint, is a mint from Canada that has garnered fame for itself from investors all over the world. The Royal Canadian Mint is a government-owned mint which acts like a privately-owned mint having the Canadian government as its primary shareholder. This is confusing, but to put it simply the RCM is one of the only government mints that also produces bullion, such as bars and rounds. Because they are owned and operated by the Canadian government, it is easy to see why investors hold RCM in such high regard.

Our RCM gold bars come in a few different sizes with each bar having more or less the same design. Every RCM bar has both the RCM name and mintmark present on the front, coupled with the weight and .9999 purity indication.

RCM was first founded in 1908 after a need for the nation to produce its own coins. Before the formation of the Royal Canadian Mint, all of Canada’s coins were minted by the Royal Mint of England, based in London. The proposal for Canada to have its own mint first surfaced back in 1890, though it wasn’t until almost 20 years later until a plan to form a mint was put into action.

On the second day of January in 1908 the first RCM facility opened in Ottawa, Ontario. While this was Canada’s first mint for producing coinage, it was merely a branch of the Royal Mint and still technically owned by English entities from across the Atlantic. In the year 1931, in the midst of the Great Depression, the Ottawa minting facility was granted its independence from England’s Royal Mint. Even after the mint gained its independence, however, it continued to rely on the Royal Mint for a long while afterwards.

In 1976, the Winnipeg branch of the Royal Canadian Mint was opened after many years of deliberation. Nowadays the RCM is responsible for minting Canadian coins, regular bullion, and an increasing number of coins for other countries around the world.

RCM produces gold bars in sizes as small as 1 ounce to as large as 1 kilogram. The most popular gold bar produced by the RCM is the 1 ounce bar, though this is all dependent on what type of investment someone is attempting to make.

1 oz RCM gold bars, like many other 1 oz gold bars, are encased in plastic and attached to an assay card in order to guarantee the bar’s authenticity. While not every RCM gold bar is accompanied by an assay, a large majority of their smaller bars are.

If you have any questions about gold bars from the Royal Canadian Mint, JM Bullion customer service would be happy to help. Please feel free to call us at 800-276-6508, chat with us live online, or simply send us an email with your inquiries. You can also visit our Payment Methods FAQ to learn more about which payment methods are accepted and what minimums may apply to your purchase.