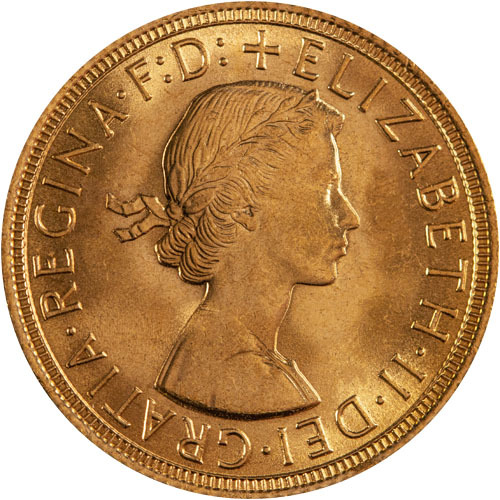 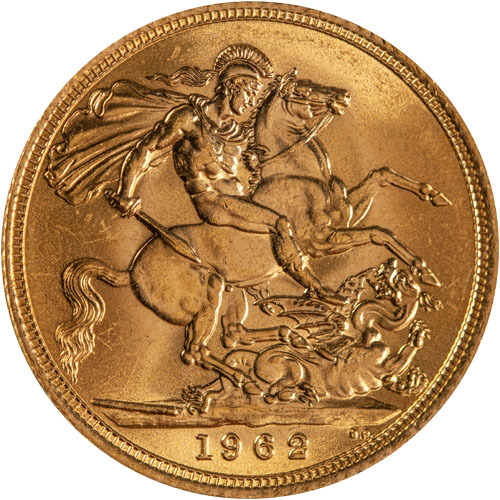 Any quantity available for $34.99 per coin over spot!
Add to WishlistLog In to add this product to your Wishlist
Free Shipping on $199+ Orders

From 1952 to 2022, Queen Elizabeth II reigned over the United Kingdom and the Commonwealth as Queen of England. Her Majesty’s reign was viewed as the nation’s second Elizabethan Era and saw great change, tumult, and growth in England. No monarch featured on the Great Britain Gold Sovereign longer than Queen Elizabeth II. Right now, Great Britain Gold Sovereign Coins are available to purchase online from JM Bullion.

Each Great Britain Gold Sovereign Coin in this product listing is available to you in a protective flip. The coins are available in Brilliant Uncirculated condition and boast older images of Queen Elizabeth II from early in her reign as Queen of England.

Great Britain Gold Sovereign Coins have been available since 1817, but the 20th century saw a change in the production of the coins. Rather than annually issuing the coins as circulation coinage, the reign of Queen Elizabeth II saw the Gold Sovereign issued predominantly as a proof or bullion specimen.

In the obverse of Great Britain Gold Sovereign Coins, Queen Elizabeth II features. The coins in this listing are predominantly dated from the 1960s and 1970s. During this period, Her Majesty was depicted on the coins in one of two effigies. The most likely effigies are the first-generation design from Mary Gillick or the second-generation effigy from Arnold Machin.

For the reverse, all Great Britain Gold Sovereigns listed here have the image of St. George on horseback slaying a dragon. This design was created in 1817 by Benedetto Pistrucci and has featured on the reverse of nearly all Gold Sovereigns issued in the last two centuries.

Please note that this listing offers no guarantee of the specific date of the coin you receive. All coins are chosen at random after your payment clears and it is possible to receive matching coins if you buy multiples.

If you have any questions when buying gold, JM Bullion is happy to help. Please contact us at 800-276-6508, online using our live chat, and via our email address.