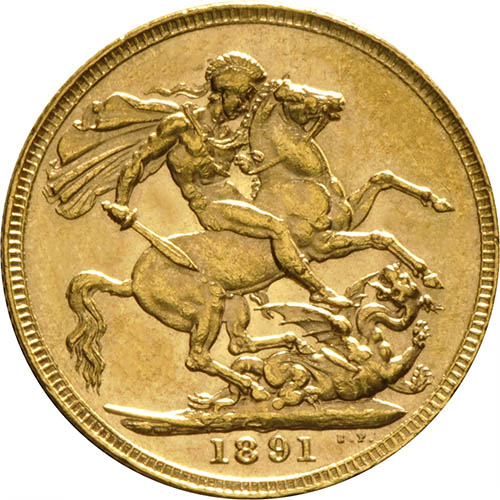 Great Britain’s gold sovereign coin is arguably one of the most recognizable coins in the world today. The modern British Sovereign coin can trace its roots to 1489 and the reign of the first Tudor monarch, King Henry VII. The coin remained popular throughout the reign of Henry VII, his son Henry VIII, and the children of Henry VIII. The modern sovereign emerged in 1817 and has been issued in .2568 Troy ounces of actual gold content. Now, Great Britain Gold Sovereign Coins from random years are available to you for purchase online from JM Bullion.

Near the end of the reign of King George III in 1817, Great Britain revived a coin design concept more than 200 years old. The English sovereigns first issued by King Henry VII 1489 after he unified the crown following the Wars of the Roses featured the monarch’s depiction sitting on the throne on the obverse with the Royal Arms of England on the reverse.

The new British Gold Sovereigns of King George III in the 19th century bore a profile portrait of the monarch on the obverse and Benedetto Pistrucci’s depiction of St. George slaying a dragon on the reverse. The coins have been issued since 1817 with the monarch’s depiction changing as the crown passed from one ruler to another.

These Great Britain Gold Sovereign Coins are available to you from random years. Each one potentially features flaws from cleaning or damage from handling. We cannot guarantee the date mark on the coin you’ll receive or the monarch’s effigy. Likewise, we cannot hand-select particular conditions for you. All orders are chosen at random once your payment has processed. Purchasing multiple coins could result in receiving products with the same date mark, monarch effigy, and condition.

We encourage JM Bullion customers to call us with questions at 800-276-6508. You can also connect with us online using our live chat and email address features.