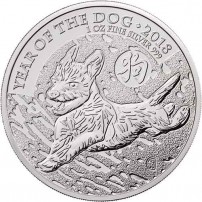 Although it was established nearly 20 years after the Perth Mint’s original Lunar Series, Britain’s Shengxiao Series of lunar-themed coins are growing in popularity among silver investors and collectors. Available now in its fifth year, the British Lunar Series of coins is out with its latest design for the Year of the Dog. Right now, 2018 1 oz British Silver Year of t... Read More 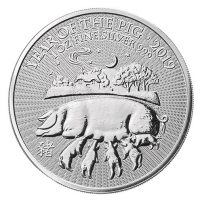 The 2019 Lunar Year is upcoming and mints around the world issuing lunar-themed coin are gearing up big releases for the Year of the Pig. Among them is the British Shengxiao Series of gold and silver coins for sale. The Royal Mint debuted its lunar collection in 2014 and reaches its midway point in 2019 with the sixth release. The 2019 1 oz British Silver Year of the Pig C... Read More 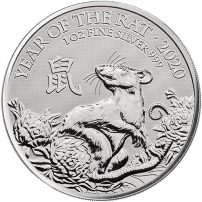 The latest design in the Shengxiao Series from the Royal Mint of England is that of the rat. 2020 marks the first year in the 12-year cycle of the Zodiac and the Year of the Mouse is first. Arriving first in the Great Race to meet the Jade Emperor, the mouse used trickery to deceive the ox and finish first in the race. Today, 2020 1 oz British Silver Lunar Year of the Rat ... Read More 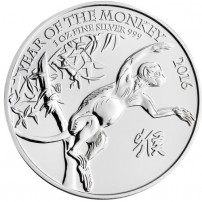 The Royal Mint of the United Kingdom has recently unveiled its latest Lunar Series coin, and it is yet another stunning design depicting the 9th creature in the Zodiac. The third release in the series, the all-new 2016 1 oz British Silver Monkey Coin is now available from JM Bullion with two stunning new designs. Coin Highlights: Individual coins ship in plastic fl... Read More 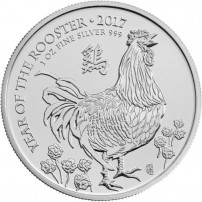 Though it is still a young program, the Royal Mint’s British Lunar Series of silver and gold coins is an increasingly popular one among investors and collectors alike. Available in bullion and proof versions each year, these coins are highly coveted for their one-of-a-kind designs. Today, the 2017 1 oz British Silver Rooster Coin is available to purchase from JM Bullion.... Read More 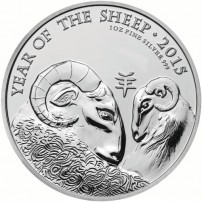 This upcoming 2015, the Chinese Lunar Calendar enters the "Year of the Sheep." Years assigned to this particular member of the zodiac are characterized by the fruition of many long chased goals and dreams. So, to commemorate this auspicious occasion, the Royal British Mint will be releasing a 2015 1 oz Year of the Sheep Silver Coin as the newest addition its renowned Shēn... Read More 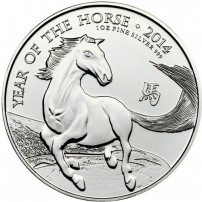 This coin is the first in the new Royal Mint Lunar Series. Please be aware that these coins ship in the exact condition as we receive them from the Royal Mint. We do not cherry-pick any coins for grading or purchase any second-hand material, so you can be sure the coins you receive will be in brand new condition. Coin Highlights: Limited mintage of only 300,000 ... Read More

The Royal Mint of England followed this lead in 2014 with the debut of its own lunar-themed series of gold and silver bullion coinage. Known as the Shengxiao Collection, using the Mandarin Chinese term for the Lunar Calendar, the Royal Mint’s collection features 1 oz silver and gold coins each year that reflect the given animal represented on the calendar at that time. Explore this unique lunar collection today!

The use of silver and gold bullion coins to promote the animals from the Chinese Lunar Calendar is a significant nod to the actual practices of Chinese culture during New Years’ celebrations. One of the more prominent traditions of Chinese New Year is the gifting of “lucky money.” It is often handed out in red envelopes as red is a color that symbolizes luck and wards off evil spirits. The combination of new lunar animals with each release in the Shengxiao Collection and the format of silver and gold coins is the perfect team.

Designs in the Shengxiao Collection of Silver Coins

Wuon-Gean Ho is the artist working with the Royal Mint on the designs in the Shengxiao Collection. Her Year of the Horse design in 2014 was her first collaboration with the Royal Mint and she has since created follow-up designs for other releases in the series. Examples of designs in the Shengxiao Collection of British Silver Lunar Coins include the following:

All of the Shengxiao Collection British Silver Lunar Coins feature the depiction of Queen Elizabeth II on the obverse side. However, the coins in this series do have differing portraits of Her Majesty depending upon release. The 2014 to 2015 coins have the fourth-generation right-profile portrait of Queen Elizabeth II created by Ian Rank-Broadley. In use from 1998 to 2015, this design showcases the Queen at the age of 70 as she wears the golden wedding crown.

Coins in the Shengxiao Collection issued from 2016 onward have the new fifth-generation portrait of the Queen. Created in 2015 and issued first in 2016, this right-profile portrait from Jody Clark of the Royal Mint shows the Queen at age 89 and uses the royal diadem crown worn in the third-generation design from Raphael Maklouf which was used from 1984 to 1997.

Another note on the designs on the obverse. Those coins available from 2014 to 2017 have a standard background field on the obverse, but the 2018 and newer releases in this collection feature the new guilloche background elements behind the Queen. Reflecting the look of braided ribbons, this design element increases the security of the coins against counterfeiting efforts.

Wuon-Gean Ho is a British-Chinese citizen and artist commissioned by the Royal Mint in 2014 to help launch the Shengxiao Collection. With more than 20 years of experience in art, she is well-trained and highly educated in the arts. Beginning in 2000, she advanced her education with various residencies including woodblock printmaking in Japan and a master’s in Printmaking from the Royal College of Art.

If you want to buy British Silver Lunar coins, JM Bullion customer service can offer you assistance and help with your purchase. We’re available on the phone at 800-276-6508, online using our live chat service, and via our email address.